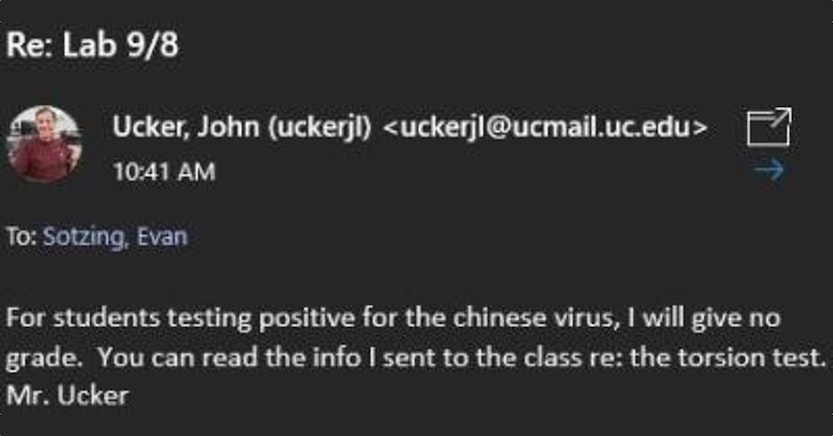 One of the most frustrating things about the coronavirus pandemic and its impact on Americans is how so much about the way our country is set up and run ultimately punishes people for taking precautions when it comes to the virus.

Most of the scenarios in which we’ve seen this happen so far involve a loss of income. People who stay home from work if they start to feel ill might lose money if they don’t have sick pay or can’t afford to go to a doctor for “proof,” parents keeping their children home for online learning may be facing financial issues as a result — the list goes on.

But we’re seeing other, non-financial penalizations for pandemic safety, as well.

College student Evan Sotzing tweeted on Thursday that the University of Cincinnati’s Health Department actually instructed him to stay home from classes because his girlfriend tested positive for COVID — a blatantly necessary safety measure to keep other students and faculty members safe.

However, Evan’s professor, John Ucker, apparently told him that he would receive a grade of zero for the lab he missed for following the rules, and a disgusting email he sent in reference to “the Chinese virus” made it fairly clear that the decision was purely punitive.

The idea that a professor — someone charged with the responsibility of shaping the minds of young adults and guiding them on a path to personal and professional success — would actually punish a student for 1) following university rules and 2) trying to prevent his classmates from getting sick or dying is reprehensible.

Calls for the university to not only correct this injustice but also investigate the professor for his blatant racism and disregard for the health of his students started pouring in.

And others expressed that they had had issues with the same professor in the past, to the point where it’s almost shocking he even still has a job at all.

The University of Cincinnati responded to Sotzing’s claims and said that Ucker has been “placed on an administrative leave with pay pending” as an investigation is supposedly launched.