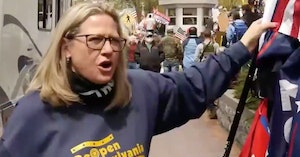 With the president’s encouragement, protestors are filling the streets to complain about the various shelter-in-place and lockdown orders in their states. They’re yelling in close proximity to one another with no masks on, demanding they be allowed to get haircuts and sicken their salon workers. In some places it has worked—Georgia is reopening certain businesses this coming week. The consequences of all these things might soon be seen in hospitals in that state, but right now, these protestors are refusing to believe anything not told to them by either President Trump or their pastor.

One woman interviewed by ITV News in Pennsylvania boiled the whole scene down to just a few sentences. Identified as Diana Ventura the business owner, she spat out her contempt for people staying home and trying to flatten the curve.

“My biggest fear right now is how quick American patriots crumbled and hid in their homes because their government told them that they should,” she says. “We can’t hide in our homes and not produce for our families and for future generation because of a virus that may kill us. So what do I say to the science? I say I don’t believe your science because I believe my God.”

‘What do I say to the science? I say I don’t believe your science as I believe my god’. Americans protest against coronavirus lockdown measures https://t.co/DoqjD3kMLJ pic.twitter.com/xOl7hvEEoR

Wait, God told her to get back to work? Or maybe Donald Trump is her god. That would actually make more sense. Other protestors told ITV News that scientists are “fearmongers.”

Something tells me his name will be in the paper again in about 3 weeks ????

It’s frustrating to hear willfully ignorant people spreading dangerous ideas along with a deadly virus, but it’s important to keep in mind how they’re being manipulated by Fox News and even local government. Money is the strongest motivator is most of these situations, and even the people complaining about wanting to get their hair cut are probably worried about their livelihoods.

Some folks believe that states like Georgia want to reopen certain businesses so workers there are forced to choose to stay home for themselves. They won’t be able to collect unemployment if staying home is a choice instead of a government order. They’ll then have to return to work and risk getting sick.

Once the workers at these establishments make the decision that it’s unsafe and refuse to work, they become ineligible for unemployment benefits. We haven’t even peaked here in Georgia yet. And they are opening the main venues of spread. Unfuckinbelievable

This just shows that @GovKemp and @realDonaldTrump would rather endanger the lives of their constituents than give them the help they need during this crisis. Right now, these workers have the choice of; come into direct contact with an infected public, or starve in the streets

Georgia is opening beauty parlors, health clubs, & nail salons. Governor Kemp wants people 'looking good" as they attend the funerals of the people who were forced back to work, so the government doesn't have to pay unemployment comp.

Kemp's order does not include banks, software firms, factories, or schools. It covers businesses usually staffed by poorer people Kemp wants to keep off the unemployment rolls. #COVID#GovernorKemp

The biggest evil is at the top, and the people in Congress or in local government who are looking at the pandemic as a financial catastrophe rather than a disastrous loss of human life.