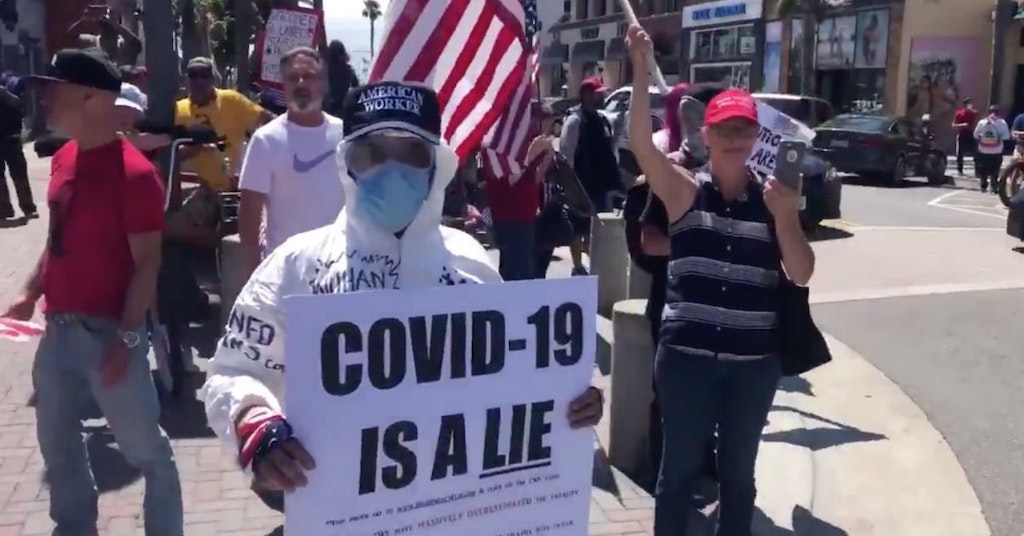 COVID-19 Denier Gets Roasted For Protesting In Full Protective Gear

As the positive effects of stay-at-home orders and general social distancing begin to show, people who have a high chance of being regular Fox News viewers have started coming out to protest these life-saving measures across the U.S. It’s bad enough seeing people hold up signs saying things like “I want a haircut” as though personal grooming is worth human lives, but this one protester in particular is just confusing.

“COVID-19 IS A LIE” reads the sign of a man wearing head-to-toe protective equipment.

Can’t make this stuff up. pic.twitter.com/HCFKEULdsA

Many of these protesters have expressed opinions that COVID-19 isn’t as dangerous as we’ve been told in spite of actual, horrifying footage of workers digging mass graves in New York. Some apparently believe that the entire illness has been made up, including this individual, who for some reason still decided to show up to the protest in full protective gear, including a face mask, goggles, and a full hazard suit to hold a sign saying “COVID-19 IS A LIE.”

They’re also wearing a hat that says “American worker” (as though the rest of us aren’t) and there appear to be additional messages written on the fake hazmat suit in marker. The sign also features additional text that is too small for anyone to read without violating social distancing guidelines.

Protests like these have popped up in multiple U.S. states, with people demanding to be allowed to go back to their unfulfilling jobs and blocking ambulances trying to get to nearby hospitals with their vehicle trains that allow them to practice the social distancing they don’t think should be enforced. This has all been under the support of Donald Trump, who has encouraged protesters with tweets calling for people to “liberate” certain states that just happen to be swing states.

It’s unclear whether the protective gear worn by this protester is supposed to be some kind of joke draped in several layers of irony, but for the majority of people, whatever that was supposed to be, it clearly missed the mark. Instead, everyone is mocking this person in between despairing for the future of humanity.

Another “liberate” protest, this time in Huntington Beach, California.

And the guy with the “COVID-19 is a lie” sign – wearing a hazmat suit, mask, goggles, and gloves – says it all.

Kind of sums up America now: protestor carries placard that COVID-19 is a lie, while wearing a mask. pic.twitter.com/cpd7bXN2u8

At a protest in Huntington Beach, one right winger holds up a sign saying that COVID-19 is a lie, while wearing a mask and hazmat suit.

The sign says one thing but the mask says another.

Conservatism in 2020: Whatever is smart, we're against it. pic.twitter.com/MOqU6kAKIj

"COVID-19 IS A LIE."
Science is real idiots. The entire world isn't in on a global conspiracy. pic.twitter.com/CV3qUZ3FGN

USA USA 🇺🇸 Covid-19 is a lie but I will protest in protective gear just in case 🤷🏻‍♂️😂 pic.twitter.com/A0e8WmpuQg

How you gon’ wear a hazmat suit and hold a sign that says COVID-19 is a lie? https://t.co/ny78WIYBpl

If COVID-19 is "a lie" why are you wearing a protective face mask? Seems slightly contradictory pic.twitter.com/lNGli6Id5b

These "liberate" protests should be called "right to die" protests. Professional protesters, arguing to be able to mingle, during a pandemic, with a contagion that has no present cure, holding signs like “COVID-19 is a lie,” while wearing a hazmat suit, mask, goggles, and gloves.

You could at least donate that gear to your local hospitals just in case.