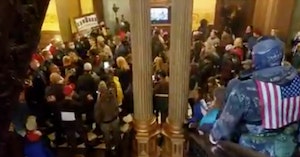 In a stunning display of white privilege, a swarm of protestors — some of them armed — forced their way into Michigan’s State House on Thursday as part of a protest against Governor Gretchen Whitmer’s stay-at-home orders.

The demonstrators faced off against Michigan State Police troopers inside the building, as the police blocked them from entering the House floor to directly confront lawmakers.

While the troopers were wearing masks, the majority of the protestors were not, and definitely were not practicing any sort of social distancing as they jammed together into the lobby.

Some of the protestors were carrying rifles.

Michigan allows for open carry in the Capitol, and nobody attempted to stop the protestors — the majority of whom were white — from bringing large guns into the building.

“There’s always a risk, but we were prepared for it,” said Lt. Brian Oleksyk. “People are allowed to exercise their right to freedom of speech and their right to open carry. We always kept an eye on it.”

Still, Senator Dayna Polehanki reported that some of her colleagues on the floor put on bulletproof vests in response to the demonstration.

“Directly above me, men with rifles yelling at us,” Polehanki tweeted on Thursday morning, alongside a photo. “Some of my colleagues who own bullet proof vests are wearing them. I have never appreciated our Sergeants-at-Arms more than today.”

Michigan has been torn over the lockdown procedures.

Governor Whitmer gave the executive order for her “Stay Home, Stay Safe” policy since March 24. Under the order, as in many states and large cities right now, non-essential businesses are shut down and people are asked to stay inside their homes as much as possible.

The order was put in place after Michigan saw a sharp increase in confirmed cases of COVID-19. To date, the state has over 41,000 cases and pushing 4,000 deaths, putting it among the states with the highest number of deaths, both per capita and on the whole.

But still, some are vehemently opposed to the stay-at-home order, as exemplified by the protests at the Capitol this week. According to state police, 400 to 700 people were involved in the protest, either inside the Capitol or on the grounds outside.

Reports from the protest swept across social media, causing quite a stir.

The stay-at-home order was extended despite the protests.

The Republican-led Legislature voted against extending the order, but Governor Whitmer signed an executive order to keep Michigan residents at home through May 28.

“While some members of the legislature might believe this crisis is over, common sense and all of the scientific data tells us we’re not out of the woods yet,” she said in a statement. “By refusing to extend the emergency and disaster declaration, Republican lawmakers are putting their heads in the sand and putting more lives and livelihoods at risk.”