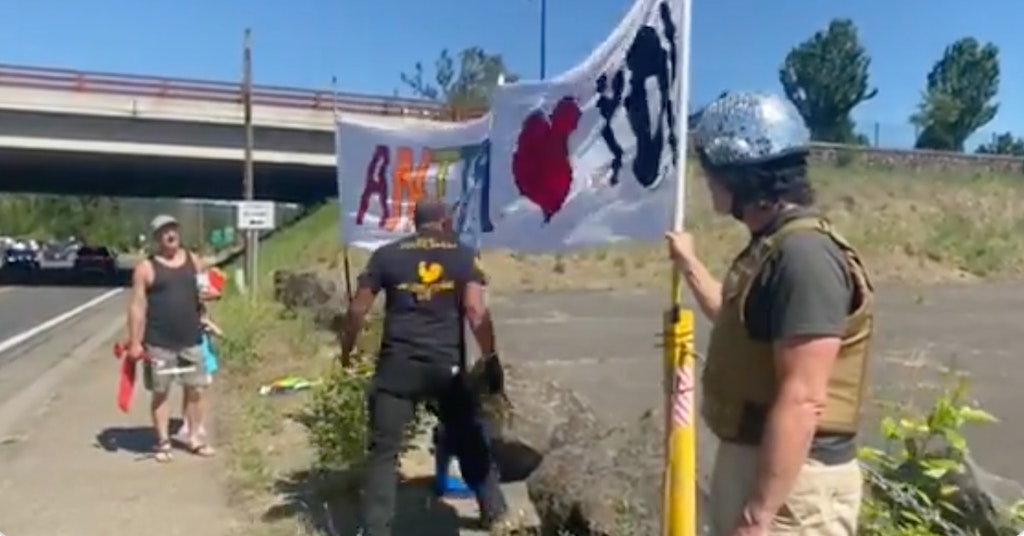 Footage of a Proud Boy attacking a man identified as a Vietnam war veteran over an antifa sign is going viral after a rally turned into a riot in Oregon last week.

The Proud Boys set up camp at Clackamette Park in Oregon City on Friday, something they have done for several weeks now. Some protestors showed up this time, including some who set up a banner reading “ANTIFA [HEART] YOU” in rainbow lettering on the other side of the highway.

One particularly aggressive Proud Boy wasn’t happy about it, and crossed the road to rip the sign down. The footage shows a man in a helmet standing calmly next to the sign as the angry dude slashes at the banner with his knife.

As his fellow Proud Boys yell out the chant across the way, the guy who attacked the banner comes back and gets in the face of the antifa man — who @NDpendentPDX described as a Vietnam war vet when they uploaded the video.

“Do you want some of me?” the Proud Boy demands.

The vet calmly asks for a moment to put his mask on as the other guy keeps trying to intimidate him. The Proud Boy then shoves him out of nowhere.

A car pulls over to assist and temporarily draws the Proud Boy’s attention, as he yells another “F—k you!” into the car and tells the driver to “suck my d—k, b—ch” and calls them a Nazi.

“Yes, we’re white supremacists!” a woman with the Proud Boys then yells from off-screen.

The Proud Boy goes at it a little longer, arguing over the meaning of the word “antifa,” before finally walking away.

The Proud Boy in the video was later identified as Barry Lloyd James Johnson, who has a history of violence both with the police and in previous clashes as captured on video.

The whole situation was appalling to watch, and folks online had a lot to say about Johnson’s behavior.

The clash between the two groups at Clackamette Park ultimately turned violent, with the Oregon City police declaring a riot and having to break everything up. And yet no arrests were made at the scene.