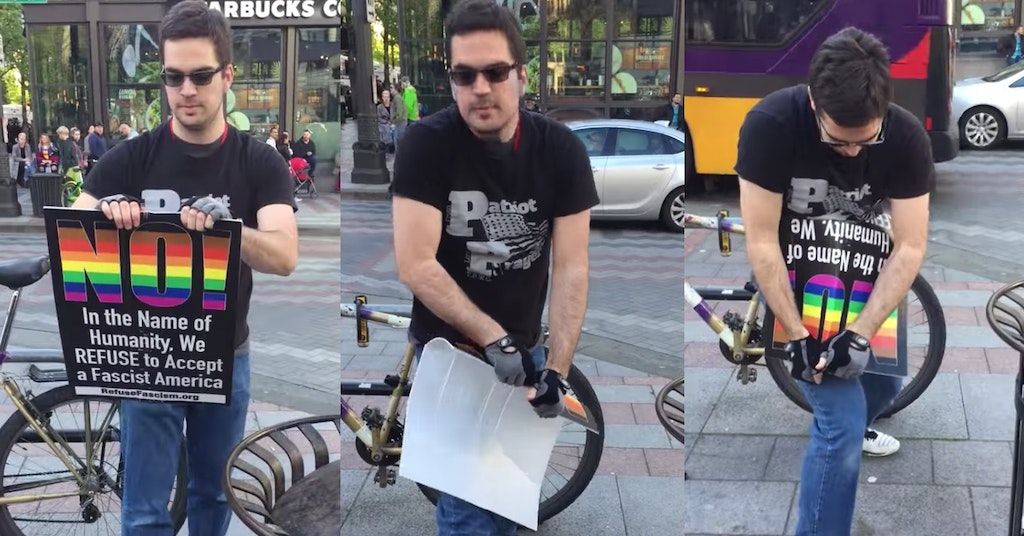 A classic video of a bigot failing horribly at his attempts to rip up a rainbow anti-fascist sign is going viral again.

The minute-long clip shows a man in a “Patriot Prayer” shirt already straining to tear the sign with his bare hands so he can shove it into a nearby trashcan as onlookers mockingly egg him on.

“A lot of engineers could help you,” the woman recording says.

The man all but bends himself in half trying to do even the slightest damage to the sign — which reads “No! In the Name of Humanity, We Refuse to Accept a Fascist America” — but he simply can’t manage it.

The woman eventually takes pity on him and lets him know there’s another way to get the sign into the garbage can.

“Hey genius, why don’t you take the lid off?” she asks. “You needed a liberal to help you with that, dude. You’re too f—king stupid to figure it out on your own.”

Embarrassed, the guy drops the lid and instead returns to trying to rip the sign up, despite having absolutely no reason to believe he will finally be successful.

Despite everyone sarcastically cheering him on, he eventually gives up and simply walks away with the sign folded in half under his arm.

The incident went down in Seattle back in 2018, where the man was counter-protesting with the Proud Boys against a rally for immigrant and workers’ rights. He hilariously tried to claim he was affiliated with neither the Proud Boys nor Patriot Prayer after the video went viral.

But as viral videos quickly come and go, a new round of people on Reddit are enjoying the embarrassment this not-Proud Boy brought down upon himself.

“Dude is gonna randomly wake up all sweaty in the middle of the night for the next few years dreaming of that moment,” wrote u/JohnBoone.

“[That] sarcastic encouragement is the biggest embarrassment for that proud boi, I’m amazed he didn’t get pissed and resort to violence,” u/rztan added. “Oh, I guess he couldn’t.”

And u/roscocoltrane suggested that his failure to rip up a rainbow anti-fascist sign is “how you get demoted in the proud boys pyramid.”

“Let’s hope that this won’t trigger a panic attack next time he tries to pry open a jar of pickles,” they joked.

Oh, and there’s definitely a longer version where the guy tries ripping up the sign for an additional 45 seconds. You’re welcome.