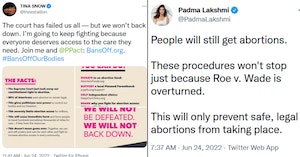 It’s been nearly two months since a draft of the Supreme Court decision to overturn Roe v. Wade was leaked, sending the majority of the country—which supports abortion rights—into a fury. As predicted, the final version of that decision contained the same six conservative judges voting to end your constitutional right to bodily autonomy and privacy.

For many, seeing this coming did not soften the blow when the official decision was announced. Many are angry that the Supreme Court has been tainted by the installation of three judges by Donald Trump (a one-term president who was impeached twice and lost the popular vote in both of his presidential elections).

In general, many people are stunned, outraged, and afraid of where the U.S. is headed, especially after Justice Clarence Thomas wrote in his concurrent opinion that they’re coming for birth control and same-sex marriage next.

A slate of celebrities and other public figures are weighing in, some with anger and profanity matching the rest of us, as the country faces another age of people dying from unsafe abortions to avoid forced pregnancy and birth.

If knowing that other people feel the same way you do—including plenty of the most visible folks in the nation—helps you feel supported and validated, this might be the list for you, starting with the always brilliant Danny DeVito: