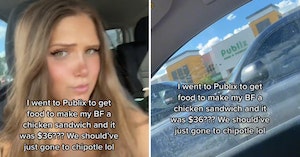 A TikTok user by the name of Danielle Walawender posted a video in which she claims to have spent a total of $36 in order to make her partner a single sandwich at grocery co-op chain Publix, making her feel like it all would have been much simpler to order out.

Publix is known to be a more expensive grocery store, due in part to it being employee-owned and also because they stock high-quality ingredients, but it’s putting a bit of a hole in claims like “young people could afford houses if they didn’t eat out.”

“I went to Publix to get food to make my BF a chicken sandwich and it was $36???” the video overlay text reads. “We should’ve just gone to [C]hipotle lol.”

“Going out to eat might be cheaper than groceries at this point.”

The brief video shows Walawender giving the camera a skeptical face before giving a shot of a Publix storefront as well as a grocery bag containing Nature’s Own brand rolls — considered to be a healthier option for bread without as many additives. However, the tradeoff is, as always, that they’re significantly more expensive that brands like Wonder Bread.

Commenters who frequent Publix have pointed out that the store sells some really good high-quality chicken, but you do pay the price.

“Publix chicken is the BEST,” wrote a commenter, “but Publix is sooo expensive!”

Others have noted that multiple sandwiches can be made from what she purchased, presumably, but it’s still a lot to drop in one trip when all you’re aiming to create is a single meal.

A single trip to Chipotle for both Walawender and her boyfriend very likely could have been kept under $20, and someone else would have made their burritos. This is a fun lesson in the fact that keeping your food bill down is often a privilege reserved for people who already have money, as well as the time and energy necessary to go out and buy ingredients and actually make the meal.

That’s why “stop ordering out” is not helpful advice for people struggling to get through life day by day, let alone purchase a house in this absurd economy we have going.

Also, in Walawender’s responses to commenters, she reported that what she purchased from Publix could only make two sandwiches. Other users wondered why she didn’t just purchase a “Pub sub,” which is a sandwich often available at Publix locations that the employees will make for you and don’t cost $36.

Others defended Publix, noting that there is something of a “shopping experience” at the chain. Walawender clearly has nothing personal against it, just a bit of sticker shock during what was probably an attempt to save money.

“At the end of the day everyone has their preference,” she said. “And also sometimes having a pleasant shopping experience is worth paying the extra $!