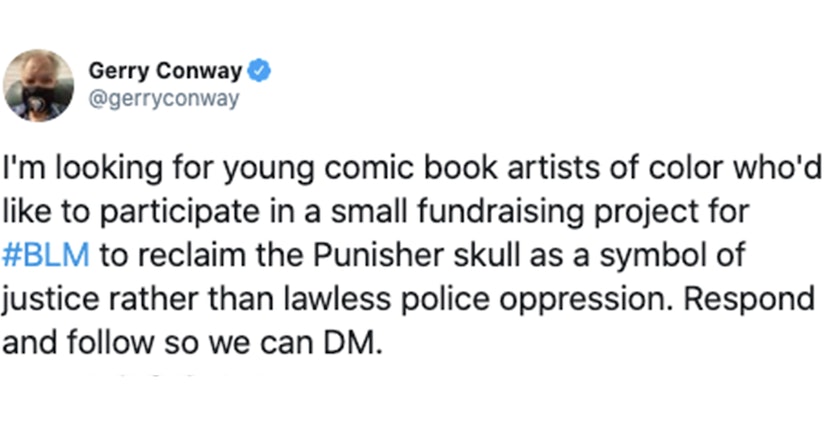 Police officers have essentially co-opted the skull logo of Marvel vigilante the Punisher for years now. It’s just another choice that shows how brazen the institution of law enforcement has become, considering the Punisher’s entire m.o. is taking “justice” into his own hands by murdering criminals the police have allowed to go unpunished.

And the writer who first introduced the Punisher back in 1974, Gerry Conway, has spoken out about his disapproval of this character becoming a police icon many times before. But now, he’s found a way to actually try to do something about it.

This week, Conway launched an initiative called “Skulls for Justice,” which aims to reclaim the Punisher logo as a symbol for Black Lives Matter.

Conway put out a call for artists last week, specifically looking for “young comic book artists of color” who would be willing to lend their talents to raise funds for Black Lives Matter.

Skulls for Justice is a series of t-shirts with designs combining different artists’ take on the Punisher skull with “Black Lives Matter,” with all funds going to the organization.

Conway has repeatedly spoken out against law enforcement’s obsession with the Punisher logo in the past.

“It’s disturbing whenever I see authority figures embracing Punisher iconography because the Punisher represents a failure of the Justice system,” he told Syfy Wire in 2019. “He’s supposed to indict the collapse of social moral authority and the reality some people can’t depend on institutions like the police or the military to act in a just and capable way.”

He continued: “So when cops put Punisher skulls on their cars or members of the military wear Punisher skull patches, they’re basically sides with an enemy of the system. They are embracing an outlaw mentality.”

Of course, that’s all too in line with what we’ve been seeing during the recent protests against police brutality and racial injustice, and what has actually been going on in the police force for years.

Marvel has failed to stop police from using the symbol.

Several companies now sell items featuring the Punisher logo mixed in with pro-police emblems, such as the Thin Blue Line flag. It’s specifically been co-opted for the “Blue Lives Matter” movement that arose in a bizarre attempt to push back against Black Lives Matter.

So if no one will stop the cops from using the Punisher logo, perhaps reclaiming it for the movement and the people they seem to stand against will do the job.

You can check out the designs as they roll out here, and even buy your own — cops need not apply.