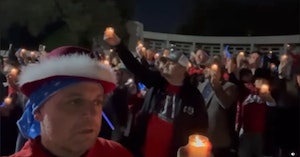 QAnon Believers *Still* Waiting For JFK Jr. In Dallas Sing Michael Jackson’s ‘We Are The World’

Yes, Qanon followers are still hanging around Dealy Plaza in Dallas, Texas, waiting for the reappearance of John F. Kennedy, Jr., who died in a plane crash in 1999, and have recently been filmed huddling together in the dark singing “We Are the World” by Michael Jackson. It’s not entirely clear why they chose that particular song other than its general unifying message, but understanding why they’re all Jackson fans requires a quick tour down the rabbit hole, so if you’re not caught up yet, buckle up.

QAnon believers flocked to Dallas early this month due to proclamations from some internet posted who has become a leader within the “movement,” albeit a little fringe even for QAnon, claiming that JFK Jr. would appear there after faking his death to announce the end of the Biden administration. He was supposed to return from the dead on a specific night in order to crown Donald Trump king of the world or something like that, but when he didn’t, the QAnon leader, Michael Brian Protzman, changed his mind, saying that he would appear at a nearby Rolling Stones concert.

When that didn’t happen, the conspiracy theory quickly evolved to encapsulate many more dead celebrities. Not only did the cultists theorize that Rolling Stones guitarist Keith Richards was actually JFK Jr. in disguise, having apparently spent the last 22 years learning to shred, but that in fact hundreds of celebrities have faked their deaths over the years in order to escape Illuminati contracts. These celebrities, including the late pop legend Michael Jackson, are now expected to simultaneously come out of hiding in order to make everything in the world right again.

“Robin Williams was here the other day,” one woman told Rolling Stone at the beginning of November. “Michael Jackson is high in the movement.”

More than three weeks after initially showing up in Dallas in numbers of around 1,000 people, only about 100 remained to watch the anniversary of the assassination of the senior John F. Kennedy at Dealy Plaza come and go without his son showing up. They believed he would appear on Monday this time, but when he didn’t they continued to wait around, holding up “Trump/JFK Jr. 2024” signs and eventually began their singalong, which seems to be turning into the world’s weirdest tradition.

Some QAnon believers have even discussed setting up a permanent compound in or near Dallas in order to continue waiting for JFK Jr., because everyone knows how much cults love their compounds.

On Tuesday, a member of the Kennedy family responded to the QAnon antics in Dallas, praising a report by MSNBC anchor Brian Williams who encouraged people to feel bad for the family, which has suffered so many losses, rather than QAnon “cult members.”

“Well said, Brian Williams,” tweeted NBC anchor and cousin to JFK Jr. Maria Shriver. “He’s right, you never get over these losses. I know many others struggle with theirs, as well. Go kindly into the days.”

Meanwhile, on Reddit, multiple commenters are wondering if it’s possible to get some good out of all this absurdity by having someone dress up as JFK Jr. to address the crowd and steer them toward conspiracy theories that would encourage action against climate change or just more general sanity.