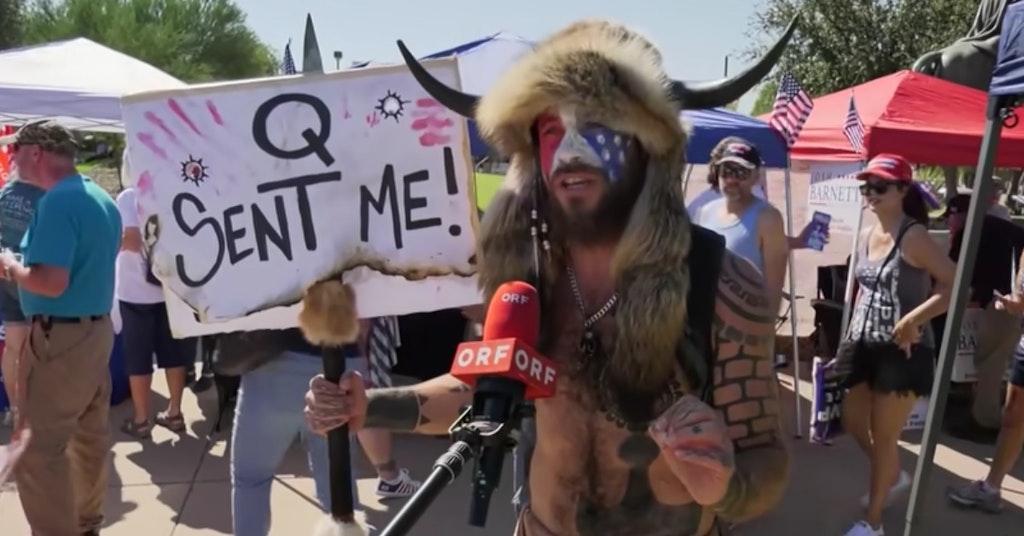 
Jake Angeli, the infamous pro-Trump, QAnon supporter photographed in horns and fur during the siege on the Capitol, is refusing to eat while in custody because he isn’t being served organic food.

The rioter was arrested on Saturday, after calling the FBI to coordinate turning himself in — and after he had been positively identified by the public through photos circulating of the mob online. He has been held in Arizona, where he lives, while awaiting further information about the charges he will be facing.

But apparently, the facilities in which he is waiting aren’t quite up to snuff.

Angeli’s lawyer reportedly informed the court that he hasn’t eaten since Saturday, as the detention facility isn’t serving organic food, while Martha Chansley (Angeli’s real name is Jacob Chansley) told reporters outside the courthouse that her son “gets very sick if he doesn’t eat organic food.”

The judge who oversaw Angeli’s first virtual court hearing told the lawyer to work with the Marshals in Arizona to deal with the rioter’s food issues.

People online were less interested in Angeli’s comfort, calling him entitled and mocking his refusal to eat non-organic.

“Imagine a dangerous MAGA terrorist crying to his mom to tell press that jail doesn’t have his favorite organic foods,” wrote Ricky Davila. “He can eat some s—t. That’s pretty organic.”

While dietary needs as related to health and/or religion generally need to be accommodated in situations like these, there’s uncertainty as to whether it actually applies in Angeli’s case. And people were all too ready to point out that there are other people in the United States who haven’t been linked to domestic terrorism that have more serious concerns that a lack of organic snacks.

Complaining that her son wasn’t able to eat organic wasn’t the only thing Angeli’s mother had to say to reporters. She also defended his participation in the riot.

“It takes a lot of courage to be a patriot, okay, and to stand up for what it is that you believe,” she said. “Not everybody wants to be the person up front.”

Organic or not, the apple doesn’t seem to fall too far from the tree.