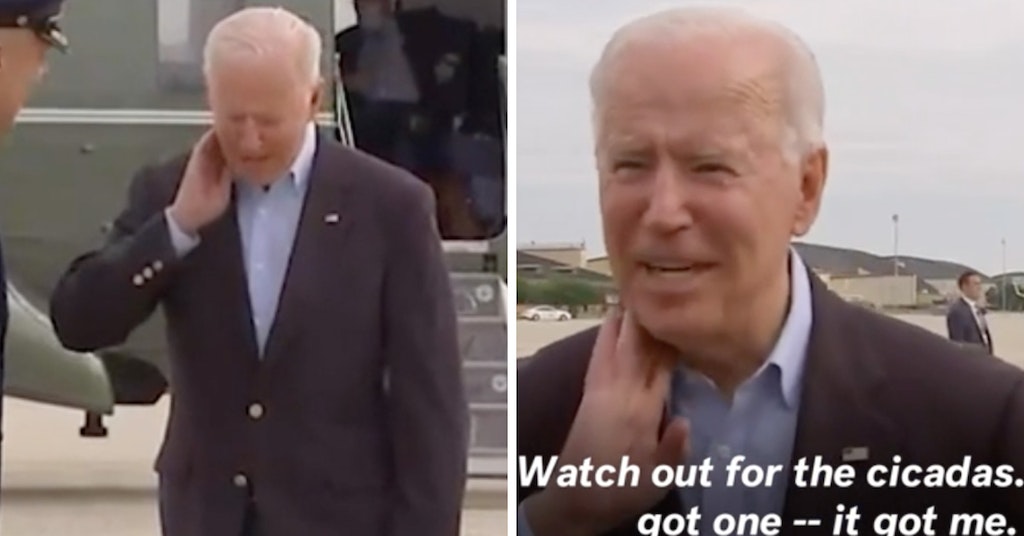 Sometimes a cicada is just a cicada, right? Not if you’re a supporter of QAnon. The conspiracy theory group recently interpreted one of the insects flying around President Biden’s neck as he boarded Air Force One as incredibly significant. Cicadas also filled the plane’s engines, delaying travel.

“Watch out for the cicadas,” Biden told reporters. “I just got one. It got me.”

We The Media, a collection of QAnon supporters with thousands of subscribers on its Telegram account, thinks that Biden swatting at the cicadas is a secret message or “comms” that can only be decode by QAnon supporters.

So what’s the secret message?

“JOE BIDEN BITTEN BY A CICADA – COMMS? Just so happens that Cicada nymphs emerge after a 17-year childhood underground!!!” We The Media wrote. “What? CHILD? UNDERGROUND? 17? Yes. Then after a short period above ground they molt, mate, lay eggs and die.”

In QAnon code, anything that can be linked to the number 17 can be interpreted as a secret message, as Q is the 17th letter of the alphabet. Additionally, the comment about the “childhood underground” refers to their belief that a network of secret underground tunnels exist where children are trafficked by satanic pedophiles.

Another prevalent belief among QAnon followers is that Joe Biden has been replaced with a clone or a body double wearing a Joe Biden mask. This belief was touched on in another post, this time by John Sabal aka QAnon John: “So, is Fake Joe Biden saying ‘he’ was compromised by the Q Team for crimes against children and now after this short period ‘in the limelight,’ having served his purpose, is soon destined to ‘die?'”

QAnon has been more low-profile after a series of humiliations, including Donald Trump’s presidential loss to Biden.