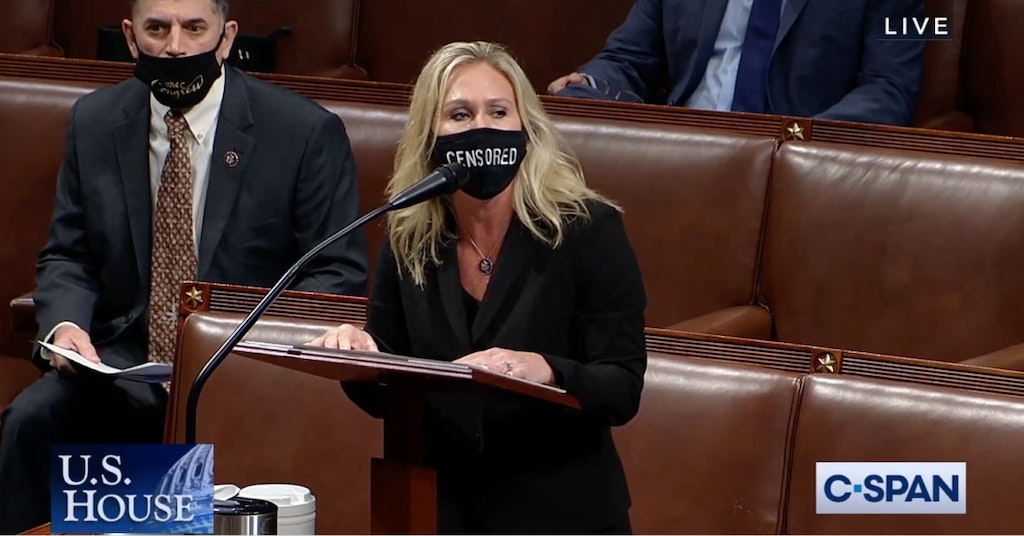 
Certain Republicans have become very upset over the wave of social media bans as companies try to purge their platforms of the white supremacists and QAnon conspiracy theorists who just happened to be following those Republicans.

While Jim Jordan whined about "cancel culture" coming for the president who was just impeached a second time for inciting an insurrection on the capital, Rep. Marjorie Taylor Greene wore a mask featuring the word "CENSORED" as she spoke on the House floor.

Few non-Republicans missed the irony of a United States congresswoman speaking at the House of Representatives live on CSPAN in front of millions of viewers while wearing a mask declaring that she's being silenced.

The irony is compounded by the fact that Greene has made a name for herself as the first member of Congress to openly speak in support of the QAnon conspiracy theory, which drove a sect of the people who took part in the assault on the Capitol to D.C. in the first place.

Had social media companies been more proactive in banning people who openly planned the insurrection and called for violence against lawmakers on their platforms, I might not have to be writing this article right now.

Greene, predictably, defended Trump by attempting to compare the insurrection to the Black Lives Matter protests that took place over the summer, which damaged some buildings but did not target congress for kidnapping and assassination. The protests also resulted in very few deaths over the course of several months and never attempted to overturn a democratic election.

"He has held over 600 rallies in the last four years and none of them included assaulting police, destroying businesses or burning down cities," Greene said, conveniently leaving out the one rally that did result in assaulting police, one of whom died from his injuries.

Black Lives Matter protesters have also never burned down entire cities, just one abandoned police precinct and a couple chain stores that routinely exploit their workers. This resulted in over 14,000 arrests and mass police brutality against protesters protesting police brutality.

Greene also claimed that 47 people died over the course of these protests, but we have been unable to locate a source for that claim. One analysis claimed that 25 had been killed in 2020 related to general "political unrest," many by police and some by right-wing extremists.

People are mostly talking about the mask, however, possibly because they can't stand to listen to Greene talk.