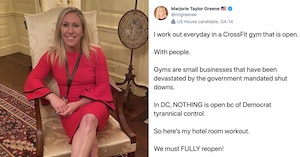 New QAnon Congresswoman Lies About D.C. Gym Closures, Doubles Down When Called Out

The incoming QAnon Congresswoman who won her election after her original Democrat opponent suddenly announced that he had to drop out of the race for personal reasons is already causing unnecessary drama.

Marjorie Taylor Greene blasted the “Democrat tyrannical control” that she claims is happening in Washington, D.C. and that she says prevented her from working out at a gym.

“Gyms are small businesses that have been devastated by the government mandated shut downs,” she wrote. “In DC, NOTHING is open bc of Democrat tyrannical control. So here’s my hotel room workout. We must FULLY reopen!”

Pointing a finger at Democratic politicians for trying to find a way to balance public safety and economic security during a worldwide pandemic has been a popular tactic among Republicans who would rather simply ignore COVID-19 and allow more Americans to die all year.

But Greene is going to learn the hard way that flat-out lying is actually faced with pushback when you live life outside of QAnon echo chambers.

While Greene paints D.C. as a ghost town that’s completely shut down, the reality is that many businesses — including gyms — are open, and may just have some restrictions in terms of capacity, hours, or mask requirements. And many people, including D.C. residents, were eager to call out Greene’s complete misrepresentation of reality.

“Gyms are open here in D.C., including at least two CrossFit places I know of,” Niels Lesniewski stated flatly.

Some folks even got particularly cheeky, making sure it was known that gyms aren’t simply open in D.C., they were incredibly accessible to Greene that very morning.

After being confronted with pesky truths that don’t suit her narrative, Greene moved the bar and doubled down. She insisted that everyone who was telling her gyms are open is lying because CrossFit gyms in D.C. don’t accept drop-ins from non-members, a wildly different story than she was spinning in her original tweet when she claimed “NOTHING is open.”

She also tagged a number of the people who had called her out for lying, clearly making that beloved attempt to “own the libs.”

Greene has already made it clear that she’s going to go hard against anything that would serve to lower the number of COVID-19 cases in the United States and eventually make it safe for people to go about their lives freely once again. She tweeted out last week that she “proudly told my freshman [Congress] class that masks are oppressive,” tagging it #FreeYourFace and claiming “My body, my choice.”

While Americans made a clear decision when they voted Trump out of office on November 3, it’s apparent through people like Greene that his mentalities of pushing insane conspiracy theories, feeling no obligation whatsoever to differentiating between facts and convenient fiction, and putting a personally beneficial agenda over the good and safety of the American people are alive and well within the Republican party.