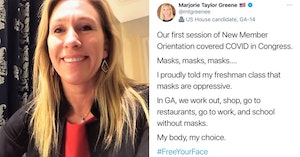 Newly-elected congresswoman and first member of congress to be an open supporter of the “QAnon” conspiracy theory/cult is coming out of the gate strong by declaring masks “oppressive” in a recent tweet. Worse, the definitely pro-life Marjorie Taylor Greene used the pro-choice slogan “my body, my choice” to defend her refusal to do the bare minimum to protect others from a deadly virus.

“Our first session of New Member Orientation covered COVID in Congress. Masks, masks, masks….” she wrote. “I proudly told my freshman class that masks are oppressive. In GA, we work out, shop, go to restaurants, go to work, and school without masks. My body, my choice.”

The largely pro-choice left does not appreciate this use of their bodily autonomy argument when they would deny the same privilege to anyone who can become pregnant. The only difference between not wearing a mask and getting an abortion is that infection people with the novel coronavirus can kill numerous already-born humans as it spreads from person to person.

Not to mention the fact that wearing a mask is profoundly easy, while being pregnant and getting an abortion are expensive, invasive, and often painful. And if that right is denied, rather than being faced with a brief, minor inconvenience, a potentially unwanted child is born into the world and then Republicans refuse to give them any help.

It didn’t take long for Greene to respond to pro-choice individuals pointing out the clear hypocrisy, and her answer with a bunch of barely-related statements that do not clear up the hypocrisy issue at all.

To be clear, when abortions work, the pregnant person is safe as well. Also, abortion is healthcare and it does, in fact, solve the problem of unwanted pregnancy.

A good amount of attention was paid to the race won by Greene due to her unabashed support of QAnon, the right-wing conspiracy theory that says Democrats are running a Satanic pedophile cabal that Donald Trump is trying to stop. It was hoped that the cult-like members would fade into the internet underground with the rest of the conspiracy theorists after Trump lost, but we have a feeling we’ll be reporting on Greene a whole lot more.

For now, she’s focusing mainly on the election conspiracy theories.

“While all you blue check marks are paying attention, go report on the cover up on the Biden steal in Georgia,” she tweeted today. “I just heard a GOP credentialed woman was just expelled from watching the recount in Floyd county. She was filming. Not against the code to record.”

It is, in fact, against the rules for people to film in the public observer area unless they are specifically authorized to do so.