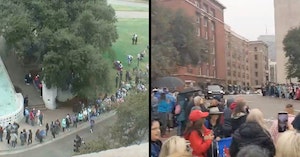 QAnon Gathered In Dallas, But JFK Jr. Did Not Return From The Dead

It’s hard to keep track of all the conspiracy theories that pass through QAnon, especially some of the wilder ones. But the fringe idea that John F. Kennedy Jr. is still alive is growing, as evidenced by the hundreds gathered in Dallas yesterday with the hopes of hearing a special announcement from a man who has been dead 22 years.

The crowd started to gather on Monday night, after claims spread on QAnon message boards that John F. Kennedy Jr. — and according to some, John F. Kennedy himself, as well — would show up on the grassy knoll in Dallas and “transfer power to Donald Trump,” making him president once more.

“It’s the second coming of Christ, going to be biblical,” read one email reposted on social media. “Kennedy’s [sic] are the Jesus bloodline.”

Needless to say, the claims did not come true, as JFK was assassinated in 1963 and his son died in a plane crash in 1999.

But facts have never stopped QAnon before, and hundreds of believers from across the country flocked to Dallas in the hopes that they would be witnessing history in the making.

When no one showed, people allegedly first made excuses, and then gradually quietly went home.

This whole thing has been completely insane, and Twitter users got a kick out of the absurdity of it.

But the fact that there are even this many Americans who really took time out of their lives and traveled to Dallas thinking that dead political figures were going to reveal themselves after all these years is actually really concerning.

It seems more and more people are being lost to insane QAnon conspiracies every day, despite none of their proclaimed events actually playing out as “prophesied.”