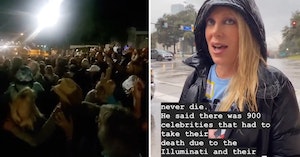 QAnon Go *Back* To Dealey Plaza To Await JFK Jr.’s Return From Death While Singing ‘We Are The World’

In case you missed it, early this month hundreds of people who believe in various aspects of the conspiracy swamp known as QAnon gathered at Dealey Plaza in Dallas, Texas, at the sight of the assassination of President John F. Kennedy. It was there that they hoped to witness the emergence of his son, John F. Kennedy Jr., who famously died in a plane crash, to announce that he would be running alongside Donald Trump on the 2024 presidential ticket.

Of course, when that inevitably didn’t happen, that didn’t mean that any of the crowd stopped believing in the tales woven by the man who appears to have begun this particular theory, Michael Brian Protzman. According to Gizmodo, Protzman has a large following on Telegram thanks to his QAnon babblings and is also extreme antisemitic and a Holocaust denier.

So naturally, QAnon folks came back to Dealey Plaza Monday night to sing “We Are the World” because Protzman would not give up on his theory that the dead would rise and begin the first zombie presidency.

Apparently, some from the initial trip to Dallas stayed there for weeks after JFK Jr. was a no-show, still expecting him to at some point fulfill Protzman’s promise. The Holocaust denier claimed after the dead man didn’t appear that he had changed his venue to the nearby Rolling Stones concert, sending his followers there to await the bonkers announcement. When it still didn’t come, Protzman again changed his prophecy to claim that the members of the band that night were actually JFK Jr., Michael Jackson, and Prince in disguise, and also that one of the backup singers was Aaliyah.

And so his followers continued to wait for their salvation in Dallas and are even discussing setting up some kind of permanent compound in the area that definitely won’t be a cult farm where they’ll be forced to print and sell Protzman’s t-shirts until they die from the ink fumes.

One local journalist was able to interview a couple of the Dealey Plaza hopefuls and peek into the very depths of the conspiracy theories that drove them there, including one woman who says that over 900 celebrities have faked their deaths over the decades in order to get out of contracts with the Illuminati and have been planning a mass re-emergence to tell everyone about the mysterious group’s nefarious plans for world domination.

Also, this lady who pronounces the word “patriot” in a really weird way.

“He said there was 900 celebrities that had to fake their deaths due to the Illuminati and their contract that they had,” says a woman wearing a JFK shirt. “So they called it the ‘Gone With the Wind’ program and they’re supposed to return as well and let everybody know what was going on with the Illuminati with the record business and the Epstein Island and child trafficking and human trafficking that they were all involved in that the press never talked about because they’re a part and complicit in being a part.”

Did you get all that?

Those outside of QAnon are, predictably, rather skeptical of these ideas.