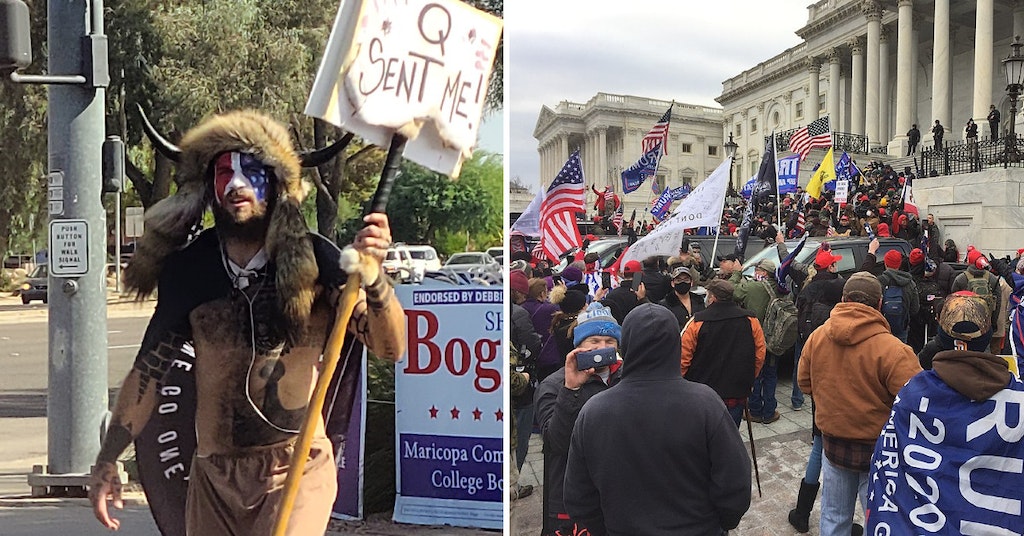 QAnon Shaman Gets 41 Months In Prison

In one of the most eagerly awaited sentencing moments among the insurrectionists who assaulted the Capitol on January 6, the notorious “QAnon Shaman” has been sentenced to 41 months in prison after pleading guilty to felony obstruction charges. He faced a maximum of four years and was given just under three and a half, the judge explaining that his role in encouraging the mob, leaving then Vice President Mike Pence a threatening note, and his bragging about it all afterward were factors in a more severe sentence than was possible.

“What you did was terrible,” said U.S. District Judge Royce Lamberth. “You made yourself the center of the riot. You didn’t slug anybody, but what you did here was actually obstruct the functioning of the whole government. It’s a serious crime.”

The Shaman, real name Jacob Chansley, caught attention for the flamboyant outfit he wore for the attempted coup occasion, sporting red and blue face paint with a furry hat featuring horns. He ran around the Capitol interior shirtless in tan slacks, carrying a bullhorn and urging people to flood inside. He was one of the first to enter the building where congress was at work certifying the votes from the 2020 presidential election.

Chansley tried to claim that he was not an insurrectionist, which is blatantly untrue, but did admit that he did wrong and said he regretted his actions from that day.

“I have no excuse,” he told the judge. “No excuses whatsoever. My behavior is indefensible.”

The insurrectionist was also caught on video carrying what can only be described as a spear into the building, though he tried to claim it was only a flag pole with an “ornamental” tip, which regardless was sharp enough to stab. Judge Lamberth rejected this defense and saw through Chansley’s afterthought apologies he used to try and get his sentence reduced to time served. He has already spent 10 months in jail awaiting his sentencing, where he was able to get special treatment by claiming that he had specific dietary needs.

Chansley famously left a note at the Capitol for Mike Pence containing what just about anyone would call a threat.

“It’s Only A Matter of Time,” the note read. “Justice Is Coming!”

This happened around the same time the mob was filmed chanting “hang Mike Pence” and a model of a gallows was erected outside the building.

This sentence is among some of the longest that have come out of the assault on the Capitol, with most of the people involved getting just a couple months in jail or probation. Scott Fairlamb also received 41 months after being caught on film punching a D.C. police officer in the face and loudly encouraging the crowd to disarm the cops and storm the Capitol.

Both Chansley and Fairlamb will also be on probation for three years each after they’re released from prison and have been ordered to pay $2,000 in restitution.