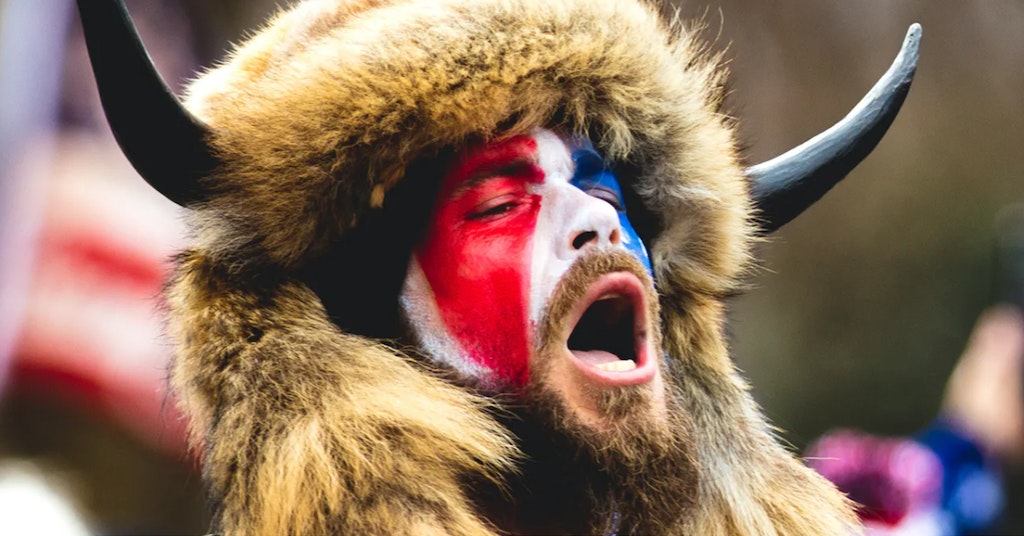 It’s hard to forget the image of a man in a fur hat and horns storming the Senate chamber on January 6 with the rest of the insurrectionists.

Jacob Chansley, the “QAnon Shaman,” has continued making headlines even after the Capitol riot, particularly after refusing to eat because he wasn’t being fed organic food as he awaited trial. Now, his lawyer is the one in the news, after calling Chansley and the other rioters “f—king retarded” to the press.

Chansley’s lawyer, Albert Watkins, is using the “Trump defense” in trying to defend his client. In other words, he’s among those claiming that his client only stormed the Capitol because he believed former President Trump wanted and demanded it. Therefore, Chansley, according to his lawyer, is not to blame for his own actions.

This hasn’t worked out so far, with the judge opting to keep the QAnon Shaman locked up as he awaits trial while pointing out that even if that were true, it would only show “the defendant’s inability (or refusal) to exercise his independent judgment and conform his behavior to the law,” meaning he still poses a threat.

But Watkins appears to be doubling down, and doing so in a way that’s pretty shocking for a lawyer mounting a criminal defense.

“A lot of these defendants — and I’m going to use this colloquial term, perhaps disrespectfully — but they’re all f—king short-bus people,” he told Talking Points Memo. “These are people with brain damage, they’re f—king retarded, they’re on the goddamn spectrum.

“But they’re our brothers, our sisters, our neighbors, our coworkers — they’re part of our country. These aren’t bad people, they don’t have prior criminal history. F—k, they were subjected to four-plus years of goddamn propaganda the likes of which the world has not seen since f—king Hitler.”

Insulting both your client and large groups of people isn’t a new tactic for trying to clear someone of their own awful decisions, but doing so in such a colorful manner and with slurs is definitely a choice.

And though Watkins has said Chansley has Asperger’s syndrome, people aren’t thrilled about him trying to use that as an excuse for his criminal behavior. No small number of people throughout the country with autism or other developmental disabilities didn’t absorb four years of propaganda and try to overthrow the government.

Trump’s insistence on repeating lies about the election being stolen is on him, and he deserves his fair share of the blame for what happened on January 6, but at the end of the day, the people who listened to it, believed him despite all the evidence to the contrary, and chose to break the law and actively attack the government because of it are responsible for their own actions.

Just like Chansley’s lawyer is now responsible for his own disgusting and ridiculous statements in “defense” of him and the other MAGA rioters.