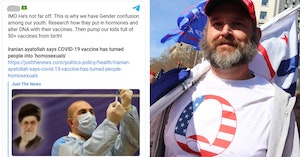 Some of the most popular QAnon channels on Telegram have reportedly aligned with more conspiracy theories, as conspiracy theorists tend to do. Aside from believing that Donald Trump is the only man who can save America from an elite ring of cannibalistic Satan-worshipping pedophiles, they are now pushing the idea that vaccines are turning the kids gay and/or transgender.

This information comes from Shayan Sardarizadeh, a journalist dedicated to watching and reporting on activity from major conspiracy theory communities.

Similar to the resoundingly debunked “vaccines cause autism” theory, the idea is that since the number of people identifying as queer or trans is increasing, it must be the result of the increase in the number of vaccines that children receive. In reality, the increasing numbers of people coming out in the LGBTQ+ community is probably due to the fact that being queer or trans is more accepted and less likely to result in their death than it has been in past decades.

The QAnon groups also seem to argue that because kids don’t start to sense that their assumed sexuality or gender is different when they’re infants, the cause has to be vaccines.

“I have many homosexual friends who said they have known they were different SINCE THEY WERE LITTLE KIDS,” one post reads. “They say they were born this way and it wasn’t their choice. When is your earliest memory? 4 years old? You’ve already received 50 vaccines by then in 2020.”

The post also demonstrates a rather flawed understanding of genetics and suggests that there could be zero gay and trans people among the unvaccinated.

Another post from a QAnon group directly reference an Iranian ayatollah who claimed that the COVID-19 vaccine is making people gay. Ayatollah Abbas Tabrizian recently published a warning about this in his own Telegram group.

“Don’t go near those who have had the COVID vaccine,” he said. “They have become homosexuals.”

This is, of course, simply homophobia from a religious extremist, but convenient for a pro-Trump conspiracy theory community trying to court anti-vaxxers into its ranks.