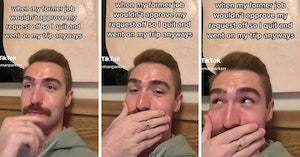 TikToker Quits Job After They Deny His Time Off

Employers have seemingly gotten more and more demanding over the years, with anecdotes of management across all industries expecting inhuman levels of devotion from workers to their jobs, at the expense of their own personal lives, constantly flooding the internet.

And one TikToker’s simple video is reminding people that is not something worth putting up with.

@newmanparkerr covered a laughing grin with his hand as the text overlay played out on his video: “when my former job wouldn’t approve my request off so I quit and went on my trip anyways.”

As he explained further in the caption, when “you get the chance to see europe, you don’t say no!”

Taking time off work has become strangely taboo in the United States, with 61.3% of Americans reporting feeling guilty about it. This is an extreme contrast to many other comparable countries, where vacations are not only normal, but expected.

The TikToker didn’t specify whether he was asking for paid vacation days or simply unpaid time off, but either way, people supported his decision to prioritize enjoying an exciting opportunity that came his way over sticking to the grind.

“I don’t even understand why it has to be approved,” @mua_nikirosee agreed. “Like I already decided I’m not showing up.”

“I will never stay at a job that declines my time off or is dramatic abt it. You won’t let me off for five days? Bye forever,” added @erinisms.

Several people pointed out that you would think companies would realize letting someone go over a few vacation days and having to train a new person is not only ethically questionable, but inefficient. But companies appear to have gotten comfortable thinking they can strong-arm workers into bowing to their demands — something that clearly didn’t work in this case.