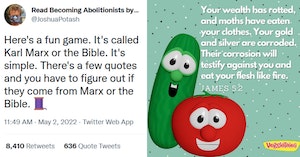 A viral tweet making an interesting comparison between the theories of philosopher, economist, and sociologist Karl Marx and the content of the Bible. Marx is known as a theorist who wrote extensively on the benefits of communism as well as the fatal flaws of capitalism, leading conservatives who love capitalism (almost, you might say, to the point of worship) to treat the man like the Devil himself.

The also seem to overwhelmingly claim to be fans of the Bible, with the vast majority declaring themselves to be Christian. However, a Twitter game thought up by abolitionist writer Joshua Potash is highlighting that the Bible and the thoughts of Karl Marx have a surprising level of overlap, which is amusing leftists everywhere.

What followed was ten quotes on the topic of money, the rich, the poor, and exactly who that money should go to. Marx, as a communist, advocated heavily for the interests of the working class and condemned the rich bourgeois and aristocracy classes, finding the latter to be parasites who steal wealth from the labor of those they hold power over.

“Whoever oppresses the poor to increase his own wealth, or gives to the rich, will only come to poverty,” reads one quote offered by Potash.

Marx further predicted that the accumulation of wealth by the rich over time would inevitably lead to a revolution from the masses.

As it turns out, the Bible also has a lot to say about the poor. In fact, throughout much of history, Christians have practiced their faith by giving money and other help to those in poverty, as Jesus preached, and avoiding gaining too much wealth. You wouldn’t know this by listening to many “Christian” politicians today, especially those on the right who call themselves Christian the most.

The twist to this game is that all 10 quotes are from the Bible and contain a mix from both the Old and New Testaments.

“How neat would it be it the text was taught this way instead of folks twisting it to serve the individual pursuit of wealth,” said Potash. “The poor Jew preaching against empire and the rich in particular would not recognize how people have twisted his words and the words of his people.”

He went on to point out that although it might be a losing battle, there are people out there who are attempting to bring Christianity back to its original intent, which was mostly about loving and helping people without judgment.

Big surprise, leftists are actually into this type of Christianity.