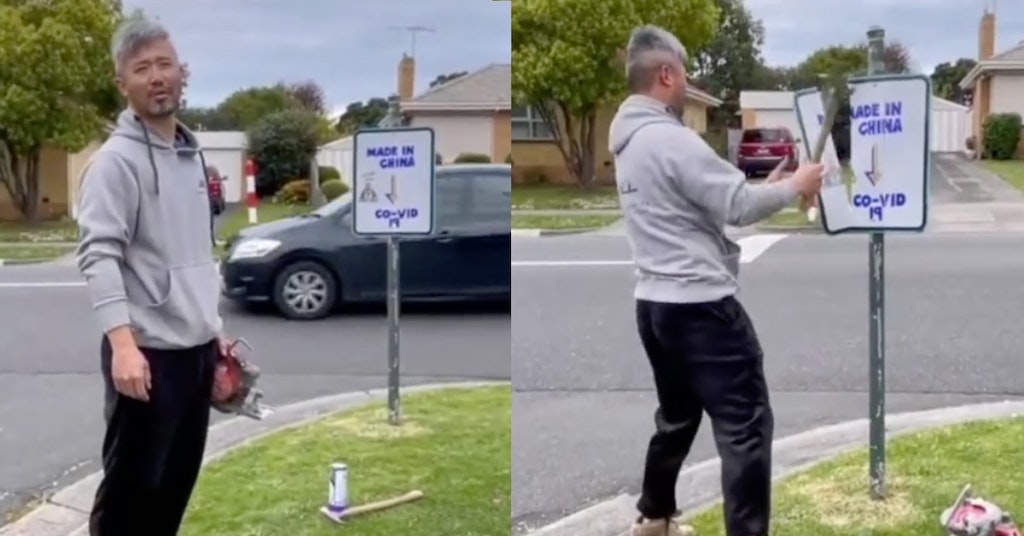 A man in Melbourne, Australia, is being virtually cheered on after destroying a racist sign blaming China for COVID.

Video of the takedown starts off with the man speaking to the camera before taking a cordless saw to what appears to be a metal sign attached to a post in the ground in a residential neighborhood.

“Made in China,” the sign reads, with an arrow pointing down to the incorrectly stylized “CO-VID 19.”

After he’s said his peace, the man slices through the sign with his saw to weaken it. He then takes a sledgehammer to it, successfully detaching it from the post, and proceeds to cut it up into even smaller pieces.

Hate crimes against Asian people have been up since the start of the pandemic, thanks to conspiracy theories about the origins of the virus as well as people using their fears as an excuse to express their racism freely.

While much of this anti-Asian sentiment has occurred in the United States, Australia and other countries throughout the world have seen too much of it as well. According to The Washington Post, nearly 1 in 5 Chinese Australians have reported experiencing “physical or verbal abuse since the pandemic began.”

But plenty of other people are sick of the racism grabbing hold, and the simple act of this man destroying a sign that could easily be seen as encouraging it prompted folks online to cheer him on.

“Cut the post too, so they can’t put it [up] again,” one viewer suggested.

“Can’t believe this is happening in 2021,” another wrote. “Hope this goes viral and that the cowards responsible for this [are] held accountable.”