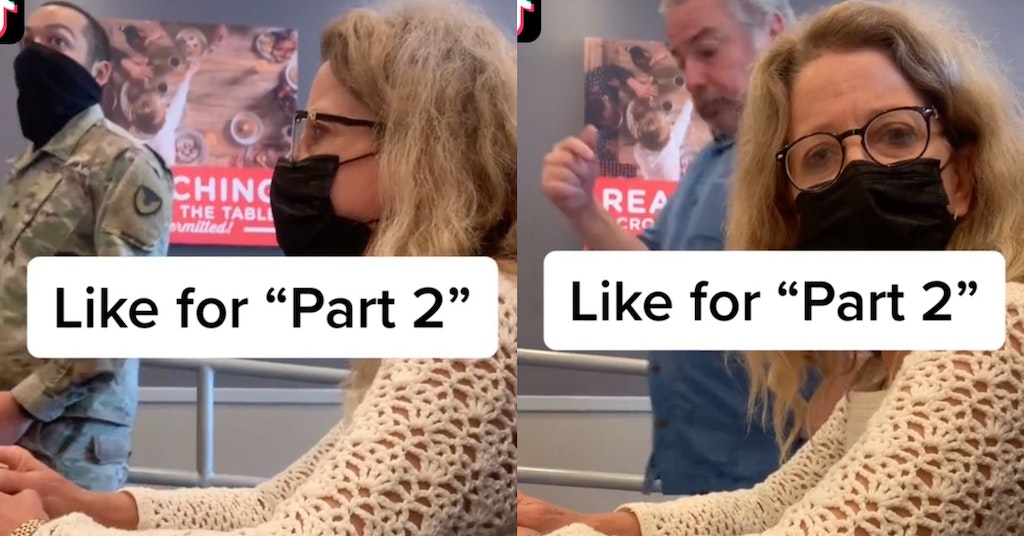 ‘Are You BLM?’: Racist Karen Harasses Soldiers At IHOP


A US Army soldier shared video this week of what he calls his “first encounter with a racist woman,” and it’s pretty odd.

Joé Jeffers Jr., who is Black, shared footage of the tail end of his meal at IHOP to TikTok in three parts. At the start, a white woman approaches the table he’s sitting at with several of his fully unformed friends and rudely informs them that she came back to the restaurant to give the server “the rest of the cash from my wallet because you guys all tip like s—tbags.”

Jeffers politely asks her to walk away, but instead, she slides into the booth next to him, effectively blocking him from leaving the table.

A bystander steps in and tries to help, but the woman isn’t budging. Instead, she starts messing with Jeffers’ cap until the man snatches it out of her hands and repeats his request for her to go.

Jeffers eventually climbs over the back of the booth to leave with his pals, and someone else starts to escort the woman out.

“Are you the thin blue line?” she asks. “I get confused. Are you BLM? Are you Antifa?” She repeats the same questions to all the booths she passes on her way out the door.

A second video appears to have been taken earlier and involves the woman trying to goad the bystander who defended them into a fight. A third features a different angle from the first and makes it apparent the soldiers were trying to leave even before she came back to cause trouble.

“The situation is being handled. I prayed about it. I let it go mentally,” Jeffers said in a follow-up video. “My higher command has control of it now, so it’s being investigated. But thank y’all so much for the concern and the words of encouragement.”

Viewers weren’t as inclined to be chill about the whole thing.

“It’s always ‘blue lives matter’ and ‘respect our troops’ til [they’re] POC or trying to stop you from committing a crime,” one commenter pointed out.