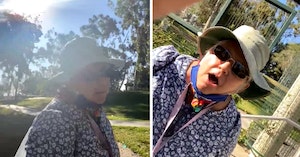 A video showing an older white woman making multiple screeching threats to a woman of color who was trying to film her workout in a public park has prompted local authorities to launch an investigation as well as a whole lot of mockery from people online.

In a previous video to the one that is under investigation, the younger woman of color can be seen filming a step workout while the white woman walks through the shot twice, bumping into the athlete the second time without apologizing. The woman of color mutters “Jesus” in annoyance at this rudeness, and that was apparently enough to set the older lady off.

After the camera is re-set, presumably to re-do the shot, this new “Karen” returned with fury.

#NEW: Mayor of @Torrance responds to a racist incident at a local park going viral tonight.

“The Torrance Police Department is investigating and will determine the appropriate course of action… Conduct like that displayed on the video cannot be tolerated.” – Patrick Furey pic.twitter.com/YZmIPp9JCD

“Next time you ever talk to me like that, you’re gonna get your a** kicked by my family,” says the white lady, and that’s just where it starts. “They’re gonna f*** you up!”

The woman of color asks what she did to deserve such words, and the white woman complains about her using the “whole stairs” for her workout. The athlete points out that there are plenty of other stairs nearby that could be used. That’s about when the older woman reveals what’s really bothering her.

“F***ing b****. This is not your place. This is not your home. We do not want you here,” she continues. “You put that on Facebook, I hope you do, because every f***ing person will beat the crap out of you from here on out.”

As the woman walks away, she starts ranting about wearing black in “California sun,” and the video ends.

The victim’s friend posted the video to Twitter, reporting that the young woman of color no longer feels safe in her own home’s public park.

My friend was threatened in Wilson Park in Torrance, California today while she was working out in a public park by a Karen. She now does not feel safe to exercise in the park because of this. This is infuriating @TorranceCA @TorrancePD @ABC7 @CNN @LANow pic.twitter.com/JkZbRpODbA

Mayor Patrick Furey of Torrance, Califonia, announced that police are investigating the incident after the video went viral and condemned the racist behavior of the white woman.

“All visitors to our open spaces should always feel safe and free to exercise while practicing social distancing without conflict,” he said. “Conduct like that displayed on the video cannot be tolerated.”

Online, people have widely come out in support of the woman of color and to mock this latest example of white lady racism.

“who wears black in california sun” has me dying

That is why people are protesting in the streets… Karen

I mean really in Torrance? If she doesn’t like asians she is in the wrong damn city. Who wears black? Who wears a sweater. Why do ppl feel so entitled to speak like this? Your friend is much nicer than I would have been.

I hope that hateful person is identified and caught!!

What is it with crazy racists and the park? https://t.co/oEHzegw46b

Somebody please stop the Karens.