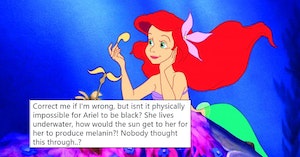 I just want to start off this post by making it extremely clear that mermaids aren’t real. We’re all on the same page about that, right? Mermaids are firmly in the realm of fantasy—that’s what makes them fun. We can imagine whatever we want about their lives under the sea, and we can also picture them any way we want. Hot, fish-like, clam-shell bra, or no bra (if you’re into that sort of thing).

Unfortunately, lots of people seem to think they have some sort of ownership over the imaginations of others, or at least a proprietary claim over what mermaids are: a mermaid is white and looks like a Disney cartoon.

This is what racists have been insisting ever since it was announced that Disney had cast actress Halle Bailey as Ariel in their new live action version of The Little Mermaid. Bailey is black, which is a step beyond what online racists seem to be willing to believe about a half human/half fish who falls in love with a handsome prince.

lol at people actually thinking that Ariel cannot be played by a black actress because of 'mermaid science' pic.twitter.com/5Djt0Wrfkn

One user wrote, “My opinion on why mermaids are white is that they live so deep underwater that sunlight hardly reaches them, thus the lack of melanin. It doesn’t matter what ocean they’re from cos they could’ve been migrating seasonally like fishes. But maybe im thinking too much.”

Thinking too much? Not quite. 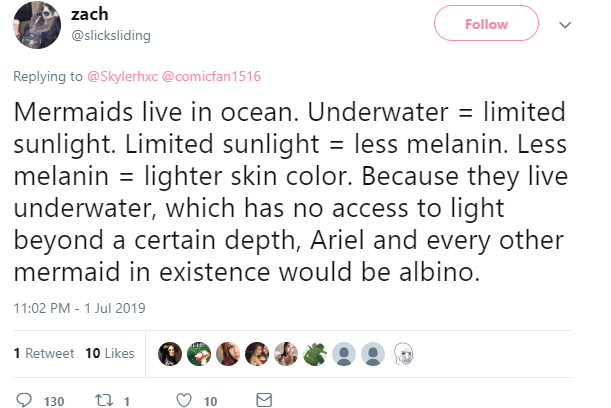 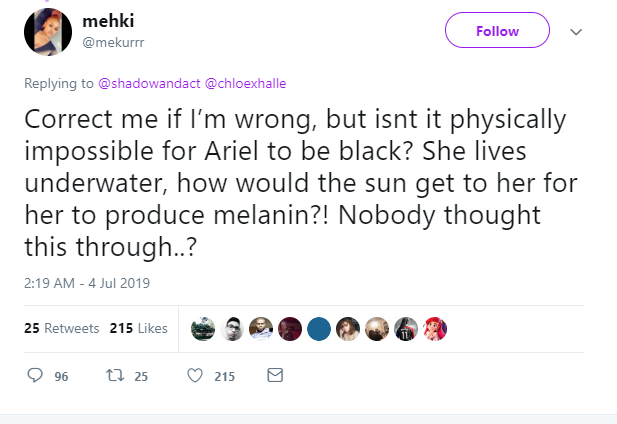 “Just for y’all trying to use science to say Ariel can’t be black (emphasis on try)… Melanocyte production isn’t even dependent on sun exposure. It’s dependent on genetics (normality of the TYR gene, various enzymes, & the overall conversion of dopaquinone to melanin),” they explained.

Others posited that mermaids definitely spent considerable time on land:

Most people pointed out what this “science” really was—a way to justify racist complaints about Bailey’s new role.

Complete failure to grasp that it is also impossible for a girl to be half fish.

The amount of referrals speech therapist get like this: "lost voice due to evil octopus queen trapping in shell necklace in deal for legs" ????

Lmfao… tweeps are PISSED, reason because being that @Disney had cast Ariel as a black girl. Because you know… ‘mermaid science’???????????? pic.twitter.com/rsWayVQbbN

someone really said ariel can’t be black because of science…bitch there is literally a singing crab in the movie & u worried about scientific accuracy. stfu. pic.twitter.com/LAcKsHQyHg

Investigating the science behind Disney stories would actually be a pretty interesting YouTube series or podcast, actually. Pretty sure it wouldn’t justify anyone’s racist freak out on Twitter, but it would generate some very interesting conversation. Like, how does Ariel talk to a seagull? Does it speak English or does she speak gull? Is inter-species communication possible? Really makes you think.