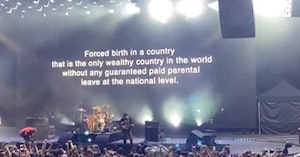 A new wave of conservatives are losing their collective minds after apparently discovering for the first time that Rage Against the Machine doesn’t share their political views.

Conservatives railing against entertainment industry professionals who express things like empathy and an interest in human rights in a way that directly contradicts the Republican outlook is nothing new. Basically anytime a celebrity speaks up, a gaggle of them somewhere cries out, demanding they keep their mouth shut and stick to entertaining.

But this spectacle becomes particularly entertaining when it comes to public figures who have been pointedly political their entire lives — and especially when that truth is constantly expressed through the art they create.

Rage Against the Machine played their first show in over a decade recently, and immediately took the opportunity to comment on current happenings in the United States. At one point, a screen on stage shared several sentiments lambasting “forced birth,” before ending in a message reading, “ABORT THE SUPREME COURT.”

If you’ve ever heard a single RATM song in your entire life, and actually paid attention to the lyrics, you already know that they are, in fact, a very political band. In addition to raging against the machine, they’ve raged against privilege, police, racism, and much more. If that didn’t make it clear enough who they generally align with, they’ve also blatantly stood against the Republican party and supported Democrats, although it wouldn’t be wild to call them even further left than the current establishment.

Conservatives have missed the mark on this music before, threatening to boycott them after guitarist Tom Morello support Black Lives Matter back in 2020, and apparently believing “Killing in the Name” is a song in support of their beliefs rather than directly in opposition to them. And now they’re doing it all over again.

That this keeps happening only feels illogical until you remember that paying attention to song lyrics requires critical thinking skills. But still, the mockery that rolls around afterwards kind of makes it worth it each time.

While it would unquestionably be better if people actually used their brains to examine the music that they allegedly once loved, and take the fairly overt messages within them to heart, if we can’t have that, at least we’ve got the funny jokes every single time this goes down.