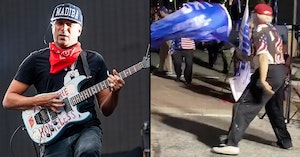 Leftist rock band Rage Against the Machine makes its political intentions pretty clear. That starts with the band’s name—it’s not a dishwasher or toaster they’re raging against—to brash lyrics addressing a range of political and social concerns.

So, when guitarist Tom Morello saw a video of two President Trump supporters dancing to the band’s signature song “Killing In The Name” in the days following the 2020 presidential election, he had to respond.

The video, shared to Twitter last Friday night from Manny Alicandro, showed two Trump supporters in full MAGA regalia dancing to the song, which alludes to police being part of a troubling history of white supremacy in the United States.

The fact that one of the dancers is wearing a “thin blue line” flag as a cape — which is a symbol of police support becoming more fraught with white supremacist affiliation — seems to not be lost on Morello.

The video was shot in Philadelphia, where the couple provided a sharp contrast to anticipatory celebrations for a Joe Biden victory in the predominantly-Democratic city.

His simple reaction, “Not exactly what we had in mind,” underscores a disconnect between Trump’s and RATM’s worldviews, made clear throughout the campaign.

It’s not the first time Morello’s had to respond to people who listened to RATM’s music without cluing into their very obvious politics.

In an epic takedown that Morello shared to Twitter this past June, a would-be critic responded to a December 2017 Instagram post from Morello, wearing a shirt that read “Mother, should I trust the government?” and a guitar with the slogan “F—k Trump” on it. The commenter noted, “Another successful musician becomes a political expert.”

And in case you were wondering how Morello reacted to the Saturday announcement from news outlets that Biden had secured the electoral votes needed to win the election, he nodded to the spontaneous public parties that broke out following the announcement.

The graphic proclaimed, “Live your life in such a way that the entire planet doesn’t dance in the streets when you lose your job.”