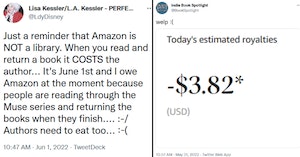 Due to an incredibly loose return policy at Amazon, authors who sell their books digitally on the platform are finding themselves in debt because people are taking advantage of what they’re calling a “hack” and returning the eBooks after reading them.

This policy is meant to allow people to return a digital book that they purchased “accidentally” for a full refund, but now people are reading all the way through the last page and getting their money back anyway because Amazon gives them a full week to do so.

This wouldn’t be so much of a problem if the cash came out of Amazon’s vast coffers, but instead it’s the individual authors who are footing the bill for the returned products. People are logging on to their Amazon accounts to find that they actually owe the company money because people are returning their fully-read eBooks, including paranormal romance and thriller author Lisa Kessler.

“Just a reminder that Amazon is NOT a library,” Kessler wrote on Twitter earlier this month. “When you read and return a book it COSTS the author… It’s June 1st and I owe Amazon at the moment because people are reading through the Muse series and returning the books when they finish.”

“Authors need to eat too.”

They do indeed, and unless you’re particularly famous, it’s rather difficult to make a living as an author in today’s world. It’s bad enough when people will only pay a couple of dollars for a digital version of your book, but now these writers are having to foot the bill because people are taking advantage of Amazon’s return policy, which is very generous with other people’s money.

“Every time you return an ebook at Amazon, the author is charged back more than what they were paid for the sale. Yes, that means we could owe Amazon at the end of the month,” reports bestselling author K. Bromberg. “Since TikToks went viral saying ‘it’s okay to return ebooks’ most authors returns have skyrocketed. Reading and returning a book is stealing. If you want free books, try the library app, Libby (among others).”

Why exactly Amazon charges authors more than what they were paid for the sale of their book when it’s returned is unclear, but as more people become aware of this problem, they’re now petitioning the company to change this policy. A Change.org petition calling for action on this problem now has over 65,000 signatures.

Over on TikTok, where the idea of returning fully read eBooks reportedly first spread, some are pushing back on the idea that taking advantage of Amazon’s return policy is truly a form of “stealing.” One user declared that, just like she would return a mostly eaten salad if she found a bug in it at the end, she would return a book if she somehow didn’t realize until it was nearly done that the whole thing was racist.

While we’ve never personally heard of a book that contains its racism until the final chapters, this would certainly be a scenario in which it would seem appropriate to demand a refund. Of course, this is not the actual problem being discussed, which is that people are reading entire books and then returning them whether the book was enjoyed or not because people either don’t know or don’t care that it hurts the authors.

In a response to inquiries about this issue by the Daily Dot, Amazon claimed that they do have “mechanisms” designed to prevent abuse of their return policy.

“Amazon aims to provide the best possible experience for customers and authors,” a spokesperson said. “We have policies and mechanisms in place to prevent our ebooks returns policy from being abused. We’re always listening to feedback and we investigate any concerns we receive.”

These mechanisms are apparently inadequate as authors continue to complain about losing money to bogus returns.