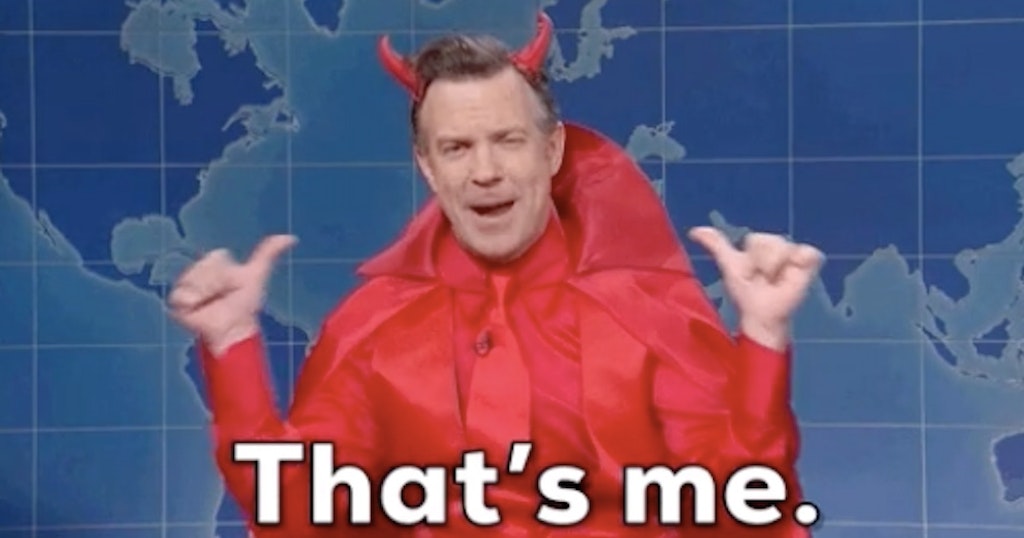 In the ’80s and ’90s “Satanic panic” swept the nation. It was kind of a preliminary QAnon, but spread largely from the pulpit. Basically, people believe Satanists were everywhere and especially working in daycares for extremely nefarious purposes. Many people had their lives ruined by unfounded accusations, and some aspect of Satanic panic still exists in evangelical circles, leading to horrible practices like conversion therapy and exorcisms.

But there’s a goofy side, too! Lots of parents pretty much channeled their fear of Satan into hating Pokémon, Harry Potter, and Dungeons and Dragons. A Reddit thread started by u/Aspect27 asked:

“To the children whose parents participated in the satanic panic of the 80’s/90’s, what are your stories?”

It gave Redditors a place to share all the awful, weird, and very occasionally funny stories of parents burning Teenage Mutant Ninja Turtle dolls and ten-sided die in an effort to keep the devil at bay. It does seem like ultimately, Pokémon have won, but it was a hard-fought battle.

Late 90s, but made it to the party. Pokemon, MtG and Diablo were all too evil. My mom searched my room for drugs way before I ever tried any.

Same religious family members have since abandoned religion and are just as lost in political nutbaggery now. They’re still impossible to talk to. —Carpaltunnelsnake

Most cartoons were forbidden for one reason or another. The Smurfs were demons. The Sword of Omens from Thundercats was a real occult relic. He-Man called himself the Master of the Universe when, in fact, God is the master of the universe. There’s a book called Turmoil in the Toybox that my mom had that detailed all the ways toys and cartoons were evil and why. I read it for fun. I also read the tracts at church, which described the evils of all sorts of pop culture things. I learned the lyrics to Prince’s Darling Nikki in a tract designed to horrify people with how evil pop music is. I also learned that KISS stood for Knights in Satan’s Service (or, sometimes, Kids in Satan’s Service. It wasn’t consistent.)

I was genuinely scared of demons. I was told they were everywhere, and our preacher described them in terrifying detail. If he was speaking metaphorically, I did not pick up on it, but I was just a child. We went more than once to see a Christian comedian/preacher who claimed to be an ex-witch. Amid mildly funny stories and impressions (he was well known for a telling of the Gospel story in a Vally Girl accent), he described how he used to see witches make tables walk around and stuff. I was SO scared of those stories. I basically believed that witches, demons, and satanists were real and really out to get me, and the adults around me confirmed this. —-WhoWasOnceDelight

My church as a kid had a pastor that wouldn’t allow any newer style (read: non-piano) music to be played, even if it was written, played, and sung by Christians about Christ.

His reasoning? “Syncopated rhythm and drum beats are what the savages in the jungles of Africa used to worship Satan.”

He was every bit as racist as it sounds. —FearlessThree6

Dungeons and Dragons was huge with my friends in the 80’s. I was absolutely forbidden to play and never even really understood what it was, until I saw Stranger Things in my 50s. It looks fun as f-ck.

Also, not satanic, but to this day my parents believe that rock music originated as a communist plot. —nDQ9UeOr

Last day of 2nd grade kids brought games from home to play. Someone brought a Ouija board which I had never heard of before and really enjoyed playing. When I mentioned it at home Mom freaked out that I had “opened my spirit to demons” and was likely possessed. This was the family narrative that persists to this day, exacerbated by my struggles with PTSD and bipolar disorder. As I got older my siblings would hold me down and perform “exorcisms.” As late as when I was 17. When I started getting mental health care at 25 they tried to convince me it was a waste of time because I just needed to get rid of the demons. The worst of them works for NPR now, no joke. —Harmony_w

My husband told me his mom threw out all his beloved ninja turtle toys after getting riled up at church one day in the early 90s 🙁 He told the story with so much sadness in his voice that I tracked down and bought him a vintage Donatello action figure still in the package to open for Christmas last year.

Poor dude just wanted his turtles in a half shell… —Scienceninja3212

My religious friends folks wouldn’t let their kids watch the Smurfs due to magic. Then it went to D&D, and then Harry Potter.

It’s like they can’t differentiate fact from fiction including their own beliefs. —fiddlenutz

I played a lot of Magic: The Gathering in my freshman year of high school (mid 90s). We’d play in the band hall with the music teacher, we had a social studies teacher who was a gigantic nerd and into it as well, so we spent a lot of time in and out of school playing.

I had the most badass green and red/black decks. I was proud of them. Won more games than I lost. A lot of time and money went into building them.

One day, my mom found them. Asked me about them and said that she felt evil coming from them. I said it was a game, one that I was super invested in. She was convinced that they were of dark arts and proceeded to BURN all of my MtG cards. You know when inks and paper burn, the flame changes colours? Yeah, well this was definitive proof that demons were escaping from the cards.

Typing this story made me mad at my mother, again. Tally it up in the dozens of reasons I don’t talk to her anymore. —OtherAcctIsDefatMod

My mom stopped me from watching DragonBall Z right when the Buu saga started to get interesting, because she saw the Dabura character who looks like an actual devil and she panicked 🙁

I wasn’t allowed to celebrate Halloween and was homeschool until high school.

And as mentioned several times, anything with magic was a big no. You know, cause watching Aladdin would’ve turned me into a sex addict witch. —Designer_Ant8543

My mom wouldn’t let us use a microwave because it was supposedly ‘satanic’, we weren’t allowed to read Harry Potter (didn’t like the books anyway, no big loss), we weren’t allowed to pass by the tarot cards/astrology book section at the book store (which was right next to the bathroom, so we would have to take the long way there instead), she thought (and still thinks) ‘The Screwtape Letters’ is a guide for satan worshipers ( I think she’s only read the line ‘My dear Wormwood’).

I remember going to a Baptist church every Sunday and watching hellfire-and-brimstone sermons about the Satanic symbology behind Pokémon, etc. It was really entertaining. —Fortnightly21

My parents were definitely swept up in the satanic panic of the 80’s and 90’s. They were convinced that there was a giant conspiracy of Satan-worshipping child molesters who were out to get us. They did their best to protect me from the evil monsters, but it was all a big waste of time. There was no conspiracy, and no child molesters. My parents were just paranoid and they ended up driving a wedge between us. —Inlets-Airfields

Halloween? Celebration of the devil

Ouija board? Devil on speed dial