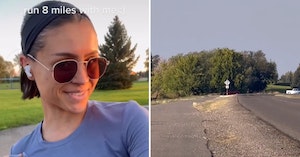 A runner who often records her progress for TikTok videos ended up teaching an important lesson to women everywhere about following your instincts and keeping yourself safe after a nerve-wracking experience caught on video.

The TikToker, who goes by Samantha Mac, was attempting to record her eight-mile run one day when she was interrupted halfway through by a man in a red car that seemed to be stalking her.

After mile five, Mac stopped her normal routine of providing updates on ever mile she passed and reported that the man had driven past her twice with his window down and appearing to watch her. She decided to report this activity on camera “just in case.”

“There’s a guy in a red car that’s driven by me twice, and every time he drives by me, he has his arm out the window and he’s, like, looking behind when he’s driving by,” she says. “It’s making me really nervous.”

Mac admitted that she might have been suffering from a bit of paranoia, but her instincts may have been correct. Not long after he passed her once again, she spotted his car parked up ahead, directly in the path between her and her own car, which was located down a long stretch that was out of sight of any other bystanders. She stopped running and began to look around for other options because she didn’t feel safe, showing the car on camera in the distance.

“I do not feel good about this,” she reported. “I have to run by this car to get back to my car, though. There’s literally no other way around.”

“It’s just one of those things where you don’t think it’s going to happen to you until it happens to you.”

Instead of taking the risk, she decided to call her parents to come pick her up. Right after announcing this to the camera, the car begins to move again, which naturally scared the crap out of her.

She began walking quickly away and was momentarily brought to tears before she made the smart choice to approach a nearby homeowner she had passed multiple times on similar runs for help.

“I run by your house all the time and there’s this guy who keeps driving by and parking,” she tells him. “Do you mind if I just, like, stay in your yard? My mom is going to come pick me up. I’m just like really worried that he’s gonna do something.”

Thankfully, the man at the house agreed, and they ended up calling the police to report the guy in the red car. Mac’s parents were later able to pick her up and get her safely home.

The runner decided to use the video as a PSA to other runners, particularly women, to make sure to trust their gut-level instincts when it comes to personal safety — especially after learning that another runner had gone missing in the area in the recent past. The police officer advised her to consider carrying some kind of self-defense weapon, which she sounds likely to take next time.

“I hope people take away that you should carry protection on you if you are running alone, and to be more aware of your surroundings and to trust your instincts,” she told BuzzFeed. “Even if that incident was nothing, it’s better to be safe than sorry.”

In a follow-up video, she reported that the police were able to locate the man in the red car and pulled him over to question him, but he had no record and they let him go.

Commenters have widely praised Mac for trusting her gut and keeping herself safe rather than ending up as another true crime story, and are generally glad that she’s okay.

“Proud of you for listening to your gut and asking for help!!” wrote one fan.

“Following a gut feeling saved my life at a rest stop,” said another. “Always trust that feeling, you’re never overreacting.”