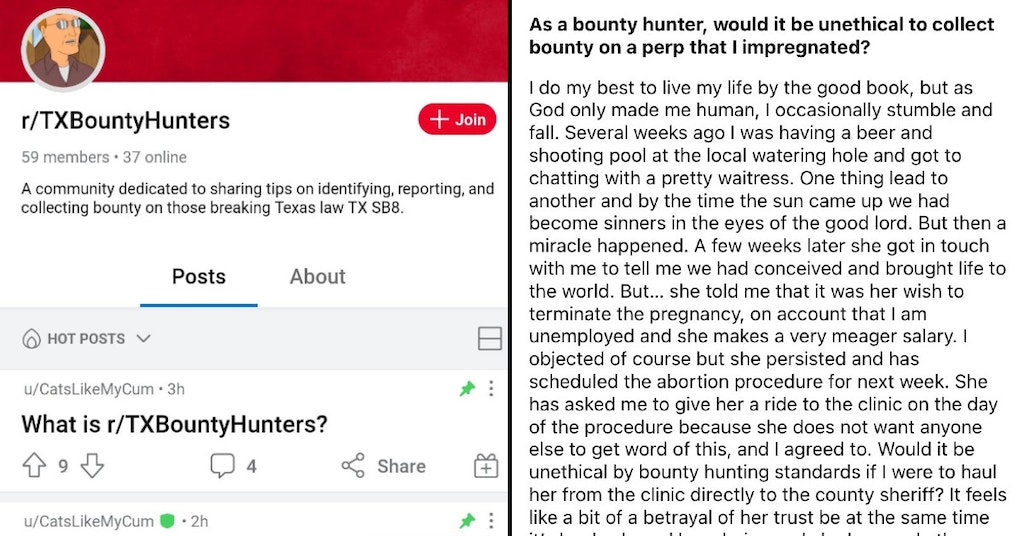 Following the Supreme Court’s vote to decline to stop the extreme anti-abortion law in Texas that bans these medical procedures after only six weeks of pregnancy, people have already discovered forums of men dedicated to being “bounty hunters” based entirely around Senate Bill 8.

One such forum was discovered on Reddit, titled r/TXBountyHunters and thankfully already banned, on which at least one guy was asking whether it would be right for him to turn in the woman he impregnated for pursuing an abortion.

The woman this man impregnated after they became “sinners in the eyes of the good lord” wants an abortion because neither of them makes much money, and the recent post says she scheduled the procedure “for next week.” If she is already past the six-week point, and it’s very likely she is, chances are high that her appointment was canceled due to the passing of SB8. Regardless, her hopefully one-time sexual partner would still like to know if he should just hand her over to the police.

“She has asked me to give her a ride to the clinic of the day of the procedure because she does not want anyone else to get word of this, and I agreed to,” he wrote. “Would it be unethical by bounty hunting standards if I were to haul her from the clinic directly to the county sheriff? It feels like a bit of a betrayal of her trust [but] at the same time it’s her body and her choice and she has made the choice to take life away from the living.”

It does feel like a “bit” of a betrayal of the trust of someone you put in that position to drive them to the illegal thing and then immediately turn them in for the same thing, but also, under the Texas law, he should turn himself in, too, for aiding and abetting the abortion in the first place. SB8 states that anyone who does so, including in the form of provided transportation, is liable to be sued for one of those sweet $10,000 bounties.

Although this story might be made up, and we all hope it is, healthcare advocate Kendall Brown points out that the very fact that forums like these are already popping up is a hint that all the grim warnings we’ve heard about how people will take advantage of this law for cash were accurate.

It’s not surprising that the subreddit was banned for promoting harassment, seeing as Reddit has some real moderation happening even if it often fails to expel white supremacists and other hateful people, there are many other online platforms available with little to no standards. It’s only a matter of time before similar forums pop up on right-wing or generally unmoderated spaces, showing how many conservatives and other greedy people are eager to take advantage of SB8.

Abortion rights advocates are warning that it could easily be used as a fantastic tool for abusers to harass, threaten, and imprison their victims, in addition to other horrific scenarios.