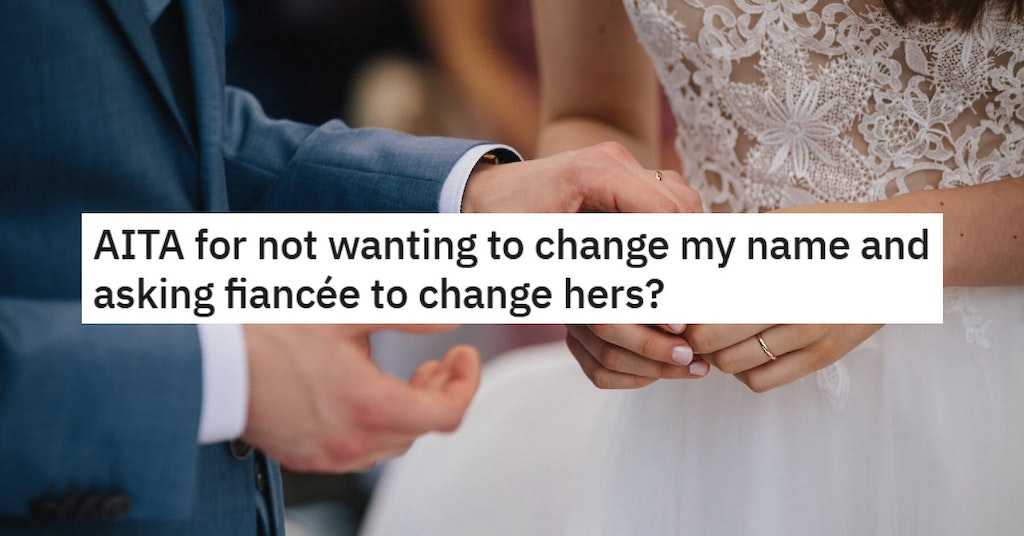 Another hapless guy is finding out what century he lives in with a post on Reddit’s “Am I The A–hole” forum asking users if he’s in the wrong to try and insist that his fiance take his last name so he can pass it along to his children like a patriarch.

This remains a common issue between couples of this gender combination, with men often expecting women they’re marrying to be the ones to take care of the massive pain in the a–hole that is changing your name on every legal document, ID, and credit card.

This one at least sounds like he wasn’t being completely unreasonable about it, and by the end seemed like he was willing to compromise. Still, it’s annoying that this is always expected of women who are more interested in passing along things like wisdom and love to their children rather than some name they might not keep anyway.

The OP argued that he wanted to share a last name with his future wife in order to feel closer to her and more like a family.

“For me part of the significance of marriage is becoming family with each other, and that includes sharing our last name,” he wrote. “When I think of being bonded with her in that way I get really happy and excited, like we are a true pair and the whole world could recognize it.”

His fiance, however, was not into the idea of putting up with “the hassle” of changing her name. If you’ve never done it before, it’s easy to overlook the fact that it’s a lot more work than just filing some paperwork with the court. You then have to go through every bank account, every ID, and anything else that might have your old name on it and make calls and do more paperwork to make sure everyone knows you’re still the same person.

That’s when the patriarchal idea of “carrying on the family name” came out as an excuse for the OP to not change his last name to hers.

“I think that’s fine, but I’m the only guy on my side of the family who could carry my family name, I have two sisters who are married already so it’s literally just me left. It’s a pretty unique name not one like Johnson or Smith. So my family name would die out if I don’t carry it and pass it on to our kids.”

His fiance, he made sure to mention, has a brother who is a man who can carry on her family name, because that’s thing people still care about for some reason.

It sounds like OP’s fiance is being firm in her decision not to change her last name, rejecting the idea of hyphenating it. It would have been nice if he had just accepted her “no” rather than trying to get internet strangers on his side, but we’ve seen worse.

In the end, the OP explained in updates that, after his fiance “got a kick” out of all the commenters voting him to be the a–hole, they worked out something that sounds like it will be fine for both of them.

“We talked and are both okay with the kids taking my last name. She is thinking about this still but might use my last name socially and keep her name legally so she doesn’t have to deal with the hassle but we still get a shared name.”

We may never know what got update number three deleted, but the comments are indeed a kick.