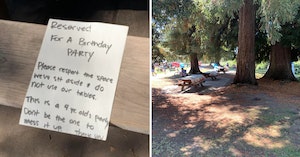 A post on the Reddit forum known as “Mildly Infuriating” is catching a lot of attention after people spent the Labor Day weekend fighting crowds to try and have a good time for once.

The post includes a photo of a note left on the bench of a park table that declares it and at least two others to be “reserved” for a four-year-old’s birthday party. The public park likely has no formal options for reserving these tables, so it’s literally just a paper note written in black marker that is not very friendly.

“Reserved for a birthday party,” the note reads. “Please respect the space we’ve set aside & do not use our tables. This is a 4 yr old’s party. Don’t be the one to mess it up. Thank you.”

Considering the fact that the tables look like standard fare for parks, we highly doubt that they belonged to the person who wrote the note, as they seemed to suggest. The fun Super Mario Bros. themed tablecloth probably belonged to them, but you can’t just claim tables by throwing a sheet of thin plastic over them. It will only get you kicked out of the furniture store.

The note-writer also did not “set aside” that space — that was the work of park employees and the public tax dollars that pay for our parks, making them for everybody, not just entitled parents with some cheap table covers.

It’s one thing to pull this kind of move for a short period before the party starts, but according to the individual who posted the photos to Reddit, the tables sat empty for six hours after the park opened with no one showing up to claim them. Meanwhile, all the other tables in the park were full because it was a sunny Labor Day — one of the prime days of the year to take the kids to the park.

The second photo confirms that at least three tables were “reserved” like this while other park-goers can be seen in the background.

It’s also notable that the tables are all in a shady area, with other tables visible baking in the sun. It’s unclear what part of the country this park is located in, but a lot of the U.S. and the larger world is currently suffering from severe heat waves (and you know why).

It can be exceedingly difficult to plan and execute a party for a gaggle of small children, their exhausted parents, and various family members who would probably rather be elsewhere, but this move has been widely panned by Redditors as selfish. There are folding tables you can bring to the park yourself if tables are extremely necessary, there’s probably a table at home, and if all else fails, sometimes you have to bite the bullet and start the party early while hoping for the best.

In an update, the OP noted that the family that finally arrived to use the tables brought a loud boombox and got a talking-to from the park rangers, and after they turned it down, people started setting up picnic blankets right next to them to make a point.

The world does not revolve around any single person or family, no matter how young a birthday child might be. Many commenters suggested that a small alteration to the note would have sufficed, because they are patient and generous people.