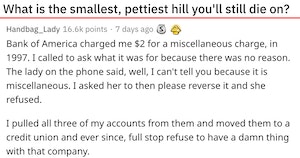 People Share The Pettiest Hills They’re Prepared To Die On

It doesn’t take too much to be petty about something — but some people are willing to upend their lives in order to keep being petty basically until they die. Have you ever been so annoyed by a person’s behavior or a company policy that you’ve actually made your life more difficult in order to uphold your convictions?

Well, on Reddit people are sharing the pettiest hills they are prepared to die on — like refusing to get Internet and breaking up with someone over a factual inaccuracy. To each his own!

“Bank of America charged me $2 for a miscellaneous charge, in 1997. I called to ask what it was for because there was no reason. The lady on the phone said, well, I can’t tell you because it is miscellaneous. I asked her to then please reverse it and she refused. I pulled all three of my accounts from them and moved them to a credit union and ever since, full stop refuse to have a damn thing with that company.” —

“I tried to set up internet in my new apartment, only to have Comcast/XFinity fail to show up during the agreed-upon time window on three separate occasions. And then they had the audacity to claim that they actually did show up and proceeded to charge me for setup and the first month of non-existent WiFi. I took time off work for this sh*t. I spent literally hours on the phone to try and resolve it (and I hate, hate, HATE talking on phones). I yelled at people (I don’t yell; confrontation makes me panicked and queasy). So, once I managed to force the cancellation and refund, I refused to get WiFi. Comcast has a monopoly in my area, and I will not give them money. It has been years. I will go to libraries and coffee shops and use their Wi-Fi. I will use phone data. I will spend vast swathes of time entirely unplugged from the internet. But I will not give that hellspawn of a company a single penny.” —

“That you need to let people off the f*cking subway before you get on. My guy, you will get on – let me off first!” —

“Before placing a ziploc bag in the refrigerator or freezer, squeeze the air out of the bag. I don’t know why my wife doesn’t, and one day I’ll have to make a choice.” —

“It is possible to look at something on a grocery store shelf without blocking the whole aisle. Looking at you, shoppers in a certain Aldi this afternoon…” —

“Scrolling through TikTok/Reels/whatever with your volume up in public or semi-public places (transit, waiting room, restaurant).” —

“It’s common courtesy to wait for someone to come off the elevator before entering.” —

8. Blow Out The Candles

“When a kid has a birthday, only HE gets to blow out the candles! It INFURIATES me to my very soul when I see other kids try to blow them out. The only thing worse is when adults LET THEM.” —

“When I have time approved off from work and something goes wrong, no it is not my responsibility to log back on and take care of it.” —

“Adding ‘s at the end of a word does not make it plural. I’ve seen it in ads. I’ve seen it on signs. I’ve even seen it on a flyer someone wrote advertising their services as a writer. People walk around like it’s normal! Out in the street! Saying that they have 14 chicken’s! Like monsters! I will die on this hill over and over until my assembled corpses make it into a slightly bigger hill.” —

“Big groups who won’t make way on the sidewalk. If you wont move I will walk right into you.” —

“I broke off a relationship because she honestly thought the earth was only 2017 years old (It was of course back in 2017.), no matter how many articles I pulled forward and no matter how many facts I provided for her, she was in complete denial that the earth could be about 4.5 billion years old. She wasn’t raised in a Christian household or any type of religious household really, nor did she ever say anything about herself being religious – I talked to her parents about it and they never understood why she thought the way she did. I am still baffled over it and she thought I was being the pettiest man alive.” —

“Put your goddamn shopping cart/trolley in the corral.” —

“Throwing your cigarette butts is littering.” —