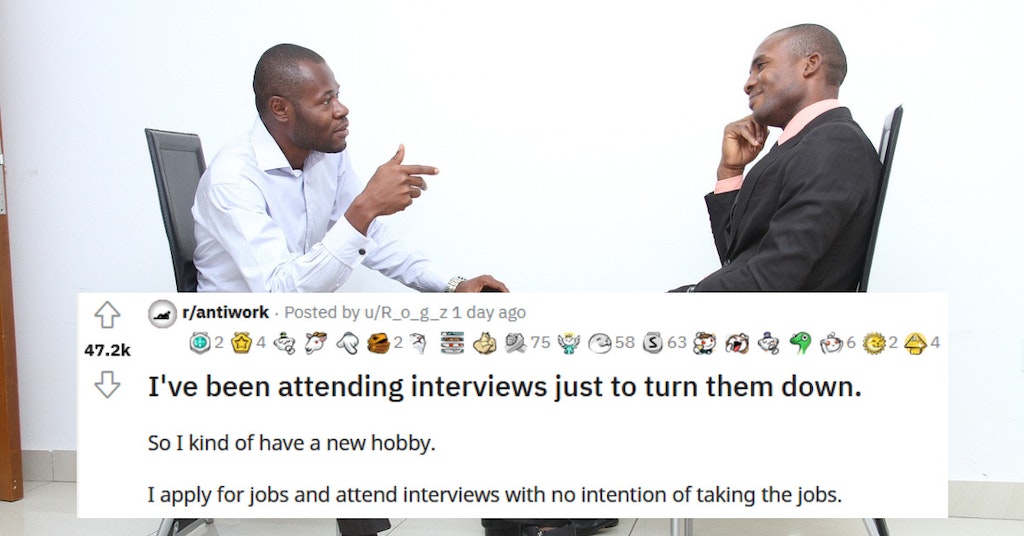 An unusual post in the hit “Antiwork” forum on Reddit is causing some raised eyebrows after the poster claimed that they enjoy going to interviews without any intention of taking the job. According to the viral post, this Redditor will apply to positions with made-up qualifications, setting themself up to be an ideal candidate, and then gets all dressed up just to question the interviewer about what the company is offering to the prospective employee.

In doing this, they say that they hope to improve the interview experience for real applicants by demanding to be treated like a desirable asset rather than someone who can be jerked around and exploited because they’re desperate to get the job. They also enjoy a bit of pampering before each interview as well as the opportunity for some local sightseeing.

“Why do I do this? Well, I like to dress up, and it feels like a real sense of occasion,” they wrote. “I get to have a nice day out and visit new places. I go to the barbers get a clean shave, grab breakfast and coffee I feel great and look great.”

The main benefits, however, come from the looks on employers’ faces when the poster asks them what they’re bringing to the table to benefit their employees.

“I walk into the interview room perfectly calm because I’m not worried about getting the job and I completely flip the script what benefits does the company provide? Why should I work there? How are you competitive to other businesses in the area?”

“The reactions I get range from confusion to interviewers convincing me that I should work there.”

According to the OP, they always end up rejecting the job at the interview when they’re presented with a salary offer, saying “it’s not really competitive in today’s market” before acting like their time was just wasted and leaving. Sometimes this results in the company contacting them again to say that the salary is suddenly negotiable, revealing a fun and handy way to get more pay out of a job you might want.

The OP says that they don’t need a job at the time, currently being a full-time student, and intends to move after they graduate, so repercussions for this little hobby seem unlikely. They acknowledge that this is a strange hobby, even suggesting that something may be “wrong” with them, but also don’t intend to stop, as they’re “sure that the next person that goes for the interview is going to have a much better experiance [sic].” In fact, due to an influx of demand, they’ve made a YouTube channel and intend to record videos of these interviews to post online.

Though this particular hobby seems odd on the surface, many Redditors have expressed approval to the OP for screwing with interviewers, especially considering how often workers get jerked around by those same people. Some have even said they enjoy similar activities or know someone who does or declared that they would like to try it, both for the social good and for funsies.