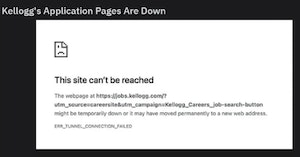 The job application platform for Kellogg’s was temporarily down after Redditors and other allies to the company’s striking workers overloaded it by submitting fake applications en masse in order to disrupt the hiring of permanent replacements for the strikers.

Kellogg’s openly announced this strike-breaking effort after the union voted down a contract that would have divided workers into two tiers, leaving less senior workers with lower pay and worse benefits than those who have worked with the company four years or more.

“The Unions representing Kellogg employees in these plants are on strike, and we are looking for employees to permanently replace them, joining hundreds of Kellogg salaried employees, hourly employees, and contractors to keep the lines running,” the application pages read.

News of this effort to hire permanent “scabs” set the Antiwork subreddit into action, with top posts linking to application sites for various regions and advising strike supporters on the best and easiest ways to submit fake applications. It wasn’t long before people were posting screenshots of error messages saying that the website couldn’t be reached.

The application pages seem to be working again as of the publishing of this article, but based on the number of Redditors and others who have claimed to have submitted a false application, they may indeed have trouble filling the 1,400 open positions in a timely manner.

Kellogg’s workers voted to strike in October after the company refused demands for increased wages, guaranteed time off, and an end to forced overtime after they spent a year and a half toiling in pandemic conditions. Many of their coworkers had to leave for reasons relating to COVID-19.

Failure by management to hire enough replacement workers resulted in the remaining workers often being forced to work 16-hour days and/or seven days per week, some going months without a single day off.

It didn’t help matters that before the pandemic, on a normal schedule, many of the workers that allow Kellogg’s products to reach families couldn’t feed their own on the low pay offered by the company.

The Kellogg’s strike echoed a significant increase in strikes and other union activity across the U.S. as the pandemic pushed many underpaid workers to the breaking point, resulting in mass amounts of people quitting their jobs in 2021 even after enhanced unemployment benefits expired.

At the same time, the Antiwork forum saw a huge boost in members and attention as people from around the world expressed their frustrations with how working conditions have worsened year after year and questioning whether anybody should have to work at all in the way we think of the very concept.

Naturally, the sincere users align with workers who are on strike.

“It’s very easy to empathize with the Kellogg’s workers,” Antiwork moderator Kevin McKenzie told The Verge. “It lights a fire in the community, and you get ideas like this that spring up and get supported.”

“Everybody feels the struggle, and the pain, and the misery that these Kellogg workers feel right now.”