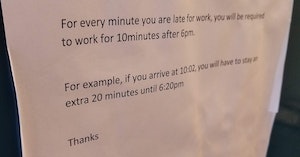 Another sign put up by someone about to lose a whole lot of employees is being dragged over on Reddit’s infamous “Antiwork” forum, where workers gather to discuss how the current system of work can be dismantled in between laughing at managers. One recent post quickly gained upvotes after someone uploaded an old photo from a former workplace, which they dubbed the “worst place I ever worked (minimum wage, of course).”

The sign declares a “new office rule,” which is never anything good and always something designed to add stress and/or extra work to underpaid workers’ already overloaded days. This is no exception.

The sign does not specify whether or not the time that workers will be forced to remain past their scheduled shift will be compensated for or not, but either way, it presents a clear problem for the company. Not compensating workers for their time on the clock is illegal, and if the company tried to pull that, they could easily find themselves sued for labor law violations.

On the other hand, if the workers are compensated for that time, the policy presents ample opportunity for malicious compliance, as multiple commenters noted. Staying 20 minutes late is one thing, but what happens when someone is an hour late? They would have to stay 600 minutes late to compensate, or 10 hours. Even if you’re only working part time, this could quickly result in overtime, which must be paid at a rate of at least time and a half in the U.S.

Either way, punishments like this for small infractions such as being an entire two minutes late is guaranteed to send morale straight down the toilet, and it wouldn’t be surprising if people quit over the sign itself. Similar instances of managers cracking down because human beings are fallible and can’t be crushed into submitting to total control have resulted in mass quitting before, and especially during the Great Resignation, it will again.

Other commenters asked if the policy would work in reverse, allowing employees to leave early if they clocked in early at the same rate. Of course, the answer to that is very likely to be “no,” but it’s a fun thought.

Overbearing managers are very often cited as a reason that people leave their jobs, as they’re continuing to do in record numbers in the U.S. month after month. The fact that controlling bosses are still trying to exert their meager little bit of power to feel big like this is only providing joke fuel for the growing audience of Antiwork.