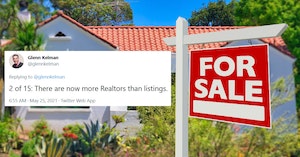 Photo via Tony Mariotti/Flickr (CC BY 2.0)

The current housing market in the U.S. isn’t an easy thing to understand if you’re not the CEO of a company like Redfin, but most people can sense that something is amiss, with the price of houses continuing to skyrocket and stories of people getting nowhere when trying to buy due to intense demand. Thankfully, Redfin CEO Glenn Kelman penned a Twitter thread that attempts to explain just how out of control the situation has become.

According to Kelman, the record-breaking house prices in major coastal cities are so high that a record-breaking number of people are looking to move to places like Idaho, where more housing-related records are being broken. Buyers are getting so desperate than one women tried to sweeten the deal by vowing to name her child after the house seller.

“It has been hard to convey, through anecdotes or data, how bizarre the U.S. housing market has become,” he wrote. “For example, a Bethesda, Maryland homebuyer working with @Redfin included in her written offer a pledge to name her first-born child after the seller. She lost.”

“There are now more Realtors than listings.”

As demand has skyrocketed, inventory is down. Thanks to this, in spite of people moving all over the country just to find a house, “homes sell on average for 1.7% higher than the asking price, another record.” The only places where the number of available homes for sale has increased are the same cities where the prices are out of control.

Meanwhile, the issuing of new construction permits has decreased significantly in major metropolitan areas while increasing in areas not often associated with high-class living, including Detroit and Knoxville.

All of this is exacerbated by a simultaneous lumber shortage, driving the price of lumber up by a whopping 300 percent.

All of this combined with a sharp increase in the number of people working from home due to the pandemic has resulted in an unusual amount of migration around the U.S., so that despite the increase in housing prices, the strong majority of home buyers are paying the same or less than what they used to.

“Even though most of the people who moved got a bigger home, 78% reported having the same or more disposable income after their move,” Kelman explains. “Idaho home prices could triple and still seem affordable to a Californian.”

In states like Texas and Florida, five to seven times as many people are moving in than out. The price differences are so extreme that people moving from the coasts are finding that they can survive on one income or even grab early retirement. Nervous lenders are “calling employers to confirm that the homebuyer will have permission to work remotely when the pandemic ends.”

This may be good news for rich people living on the coasts who are willing to move, but for those with lower incomes, it’s all bad news. This influx will likely drive up housing costs further where they live, pushing the dream of home ownership further out of their reach. Meanwhile, people struggling to afford rent around the cities where all the jobs are can’t afford to move out to where it’s cheaper, even if there were jobs there or if they can still work from home.

“It’s not just income that’s k-shaped, but mobility. 90% of people earning $100,000+ per year expect to be able to work virtually, compared to 10% of those earning $40,000 or less per year. The folks who need low-cost housing the most have the least flexibility to move.”

Kelman tries to end this on a positive note, saying that the American people “have more room to grow than we ever imagined.” However, many prospective home buyers have chimed in to say that they have all but given up due to the high demand, and others fear another housing market crash like the one that led to the Great Recession around 2008.