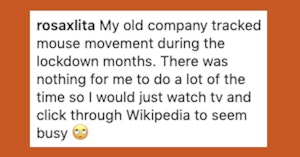 A worker wrote an anonymous story and published it on Pedestrian.tv about how work culture took an ugly turn after everyone at her office were finally told they could work from home in the first few months of the COVID-19 shutdown down. The writer says that once they were allowed to leave the office, the real nightmare began—everyone had to have their computer cameras on at all times.

A post shared by SHIT YOU SHOULD CARE ABOUT (@shityoushouldcareabout)

“They tried to sell it to us as ‘providing a sense of community’ and ‘accessibility,’ as well as ‘if someone has a question, they’ll know if you’re there or not!,” they wrote. “It was a surveillance power trip and an acute demonstration that they didn’t trust us, not even a tiny bit. We were strictly told working from home was not an opportunity to do your laundry.”

They then said it was incredibly distracting to see their co-workers on the screen at all times, too, and they were all forced to have meetings in the morning and in the evening to cover everything that happened during the day… while they were all watching each other.

They concluded that they eventually left the company and found a job where getting their work done is all that matters, not how many times they use the bathroom. The story eventually got posted on Instagram, on @shityoushouldcareabout, and the comments are full of stories of similar surveillance methods that killed their drive to work for their company. There were a few people who approved of the company’s methods, but it’s hard to trust anyone who really loves the boss. Here are their stories: