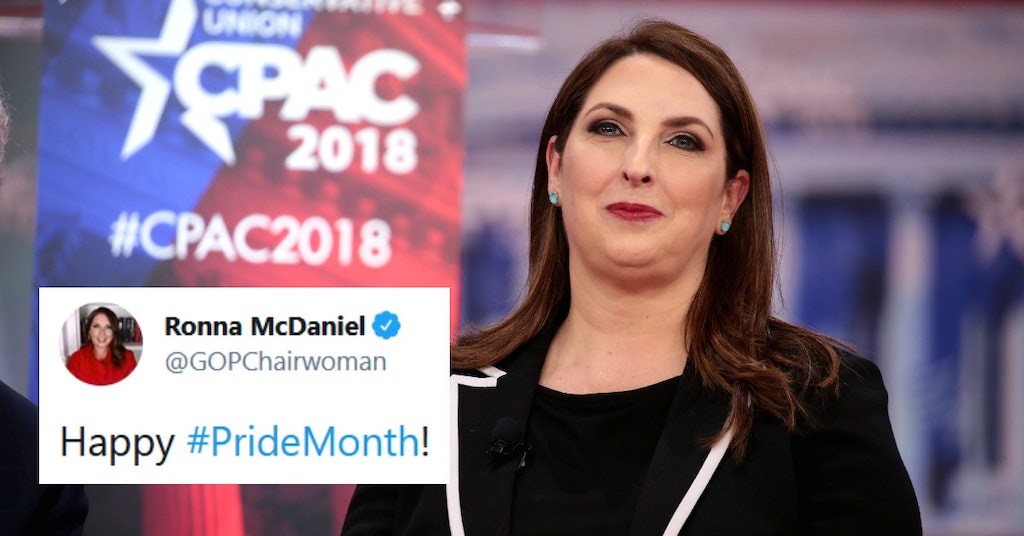 Republicans attempting to court a population that is becoming increasingly openly queer, with younger generations coming out in record numbers as it becomes safer to do so, are discovering that a good portion of their party is ready to die on top of the homophobic hill they’ve created for themselves.

Last week, Chair of the Republican National Committee Ronna McDaniel tweeted out a simple message wishing everyone a happy Pride Month before bragging about how accepting the party is to LGBTQ+ folks and also before it rushed to prove her wrong.

“@GOP is proud to have doubled our LGBTQ support over the last 4 years, and we will continue to grow our big tent by supporting measures that promote fairness and balance protections for LGBTQ Americans and those with deeply held religious beliefs,” McDaniel wrote.

Unfortunately for her, those members of the party with the “deeply held religious beliefs” were so offended by her doing the absolute bare minimum to try and draw queer folks into Republicanism that some are calling on conservatives to stop donating money to her or the entire RNC.

“If McDaniel was looking for a way to end her party’s record-breaking fundraising, she nailed it,” wrote Tony Perkins for the deeply homophobic Family Research Council. “Right now, there are few things she — or any Republican — could have said that would have been more tone-deaf and offensive than applauding the woke agenda her base is trying to combat.”

We assume that by “woke agenda,” Perkins was referring to the acknowledgment that LGBTQ+ people exist and might vote.

Another intensely bigoted right-wing group, the Illinois Family Institute, called on McDaniel to resign for her tweet claiming that the Republican tent is big by calling the existence of queer and trans people the biggest threat to free speech that ever existed.

“To have the head of the Republican Party celebrate the egregious sins of homosexuality and cross-sex impersonation should shock and outrage Republicans,” they wrote. “‘LGB’ and ‘T’ activism pose the greatest threat to First Amendment protections of speech and religious exercise ever posed in American history.”

At the bottom of the post, the institute encourages readers to “Click HERE to send a message to GOP leaders (state and nation) urging them to call for Ronna McDaniel to step down for her ignorance and failure to uphold foundational principles critical to the health and future of America.”

Other Christian conservatives ran to Twitter to express how much they disagree with McDaniel that human variety should be tolerated and queer people deserve rights.

Meanwhile, over on the left, people are ragging on McDaniel’s tweet for being completely mismatched from the Republican party’s actual position on queer and trans people, let alone their actions, particularly as they rush to pass anti-trans bills in as many states as possible.