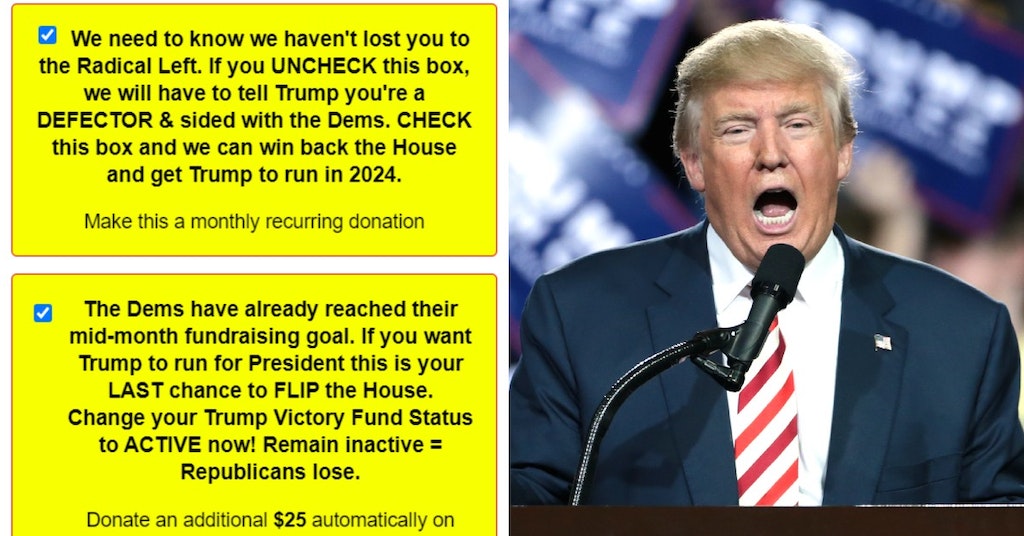 
The National Republican Congressional Committee (NRCC) is being accused of scamming or at least manipulating Trump supporters into making monthly donations, relying on same tactic the Trump campaign used that forces donors to uncheck a pre-checked box if they don’t want their bank accounts to be charged monthly.

Not only does the NRCC double down on what has widely been called a scam and that forced the Trump campaign to refund millions of dollars in campaign contributions, it’s threatening to tell the former president that you’re a “DEFECTOR” if you dare uncheck the box.

This has been highlighted in a series of tweets showing how this kind of guilt-tripping is used through multiple donation forms pushed by the committee.

New York Times reporter Shane Goldmacher and others have been monitoring the NRCC’s website in regards to this, and as of this article’s publishing, the threat message remains on their donation page.

“We need to know we haven’t lost you to the Radical Left,” the text next to the recurring donation checkbox reads. “If you UNCHECK this box, we will have to tell Trump you’re a DEFECTOR & sided with the Dems. CHECK this box and we can win back the House and get Trump to run in 2024.”

That is certainly one way to treat supporters whom you’re asking to give you money in exchange for nothing. And it continues in a very similar box below the “DEFECTOR” one that tries to make you double your donation.

“The Dems have already reached their mid-month fundraising goal,” it claims. “If you want Trump to run for president this is your LAST chance to FLIP the House. Change your Trump Victory Fund Status to ACTIVE now! Remain inactive = Republicans lose.”

If you want to make a one-time donation of the amount you originally clicked on to donate, you have to ignore all this loud text and uncheck both boxes.

The Bulwark published a full walkthrough of these manipulation tactics by the NRCC, starting with a dishonest text message claiming to be an invitation to Donald Trump’s “new social media site” (which doesn’t exist) but instead takes you to a donation form. This includes a 10-minute timer pressuring you to donate quickly to be the “first to join” this non-existent social media platform.

It also forces you to uncheck two boxes if you don’t want to double your donation and make it monthly, telling you to uncheck the box “if you do NOT stand with Trump,” even though you’re giving their pro-Trump organization money. The second box you have to uncheck is particularly manipulative.

“Trump Patriot Status: MISSING!” it yells at you. “As a TOP grassroots supporter, we were surprised to see you ABANDONED him. This is your LAST CHANCE to update your status to ACTIVE!”

Or what? The form does not say.

Normally, a donation page like this would give you the option to check boxes to make your donation a recurring one rather than forcing you to uncheck the box and potentially give more than you intended. This unchecking tactic from the Trump campaign cost some donors thousands before they discovered what had happened and were left feeling scammed.

A New York Times report found that the Trump campaign and the Republican National Committee were forced to issue “more than 530,000 refunds worth $64.3 million” to misled donors in late 2020. This was characterized by the Times and others as an interest-free loan gained without consent from the very people supporting their efforts to gain control of the nation.

It’s hard to imagine where Republicans could go from here in terms of scamming and guilting donations out of their own supporters.