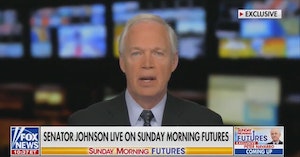 GOP Senator Ron Johnson of Wisconsin went on Fox News Sunday and floated the idea that House Speaker Nancy Pelosi is using the second Trump impeachment as a “diversionary operation.”

Considering the fact that this particular impeachment is about Donald Trump’s incitement of an assault on the Capitol, he seems to be suggesting that this insurrection was Pelosi’s fault.

Johnson didn’t directly specify what was so bad that it needed an entire impeachment trial of a now-former president, only that he was “suspicious.”

“Is this another diversionary operation? Is this meant to deflect away from potentially what the speaker knew and when she knew it?” he said. “I don’t know, but I’m suspicious.”

For greater context, just before this clip, Johnson said he believed the “Russian hoax was a diversionary operation from the corruption that was occurring within certainly the FBI and potentially some of our intelligence agencies.”

By “Russian hoax,” we assume he means the pile of evidence that Vladimir Putin and Russian intelligence conspired to influence the 2016 election in Trump’s favor. If there is corruption in the FBI, it appears that this has taken the form of white supremacist infiltration, which has at the very least extended to the U.S. military and police.

There have been attempts here and there by Republicans to suggest that the security failures that allowed a mob of Trump supporters to break into the Capitol building was somehow the fault of the Democrats. In reality, Pelosi has no direct control over Capitol police or security forces. Bee Barnett, director of communications and programs for the U.S. Capitol Historical Society, explained this to the Associated Press in an email.

“No one person oversees USCP—the oversight apparatus includes representation from the Architect of the Capitol, the House and Senate Sergeants at Arms, as well as committees from both Houses of Congress,” she said.

The people who are in control of the day-to-day operations of this security have already resigned. Johnson, however, has not resigned for his support of Trump’s 2020 election fraud conspiracy theory, which is actually to blame for the Capitol riot happening in the first place.