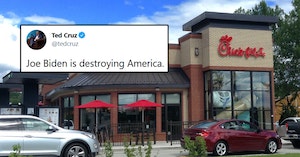 Photo via Mike Mozart/Flickr (CC BY 2.0)

If you haven’t yet heard, popular fast-food restaurant Chick-fil-A has been hit by a national shortage of its beloved dipping sauces due to “industrywide supply chain disruptions,” forcing the chain to issue an apology to distraught customers. To deal with the problem, the company has resorted to rationing the little cups of sauce to one per entrée order until their supplies are back to normal, which they are working on as hard as they can, they promise.

In the meantime, U.S. Republicans know exactly where to lay the blame for this fast chicken sauce catastrophe: President Joe Biden.

Just one example of this is the campaign to re-elect Kevin Stitt as governor of Oklahoma. Stitt lays the blame for the sauce shortage directly at Biden’s feet, as well as the recent gas shortage and the cost of groceries, which has been going up since always.

“Chick-fil-A has a sauce shortage,” reads the Stitt campaign website. “And you want to know why? Because of Joe Biden’s radical liberal policies.”

No, they do not explain what policies those are, what makes them “radical,” or how that connects to fried chicken-related goop. They do mention “PETA’s vegan agenda” as though everybody except PETA doesn’t hate PETA, and promises that all these problems can be fixed if you just send Stitt some money.

In case you thought that maybe this was just one Republican’s fundraising effort, enjoy this Ted Cruz tweet that reads like what the kids call a “s–tpost” but is apparently sincere.

It’s not entirely surprising that Republicans are trying to turn the “less sauce” tragedy into a political thing, as Chick-fil-A has been the center of politicized flashpoints in the past. Many on the left have a problem with the fast-food chain due to the long history of its owners donating to homophobic hate groups. Every time that comes up again, conservatives go running for the chicken sandwiches, but now they can only get one sauce with that.

Disruptions in supply chains are bound to happen every now and again, affecting various items in all kinds of industries. Recently, there were many such disruptions for a very diverse array of products after that huge boat got stuck in the Suez canal. As fun as that was at the time, they did warn us that there would be consequences.

Chick-fil-A has not given a specific reason for its sauce shortage, blaming it vaguely on the supply chain but not any particular boat or president. However, the Republican tradition of blaming every problem under the sun on any Democrat in the Oval Office is an old one indeed, culminating in the “thanks Obama” meme back when Barack was behind the desk. It’s both funny and depressing, but let’s try to focus on the funny part.