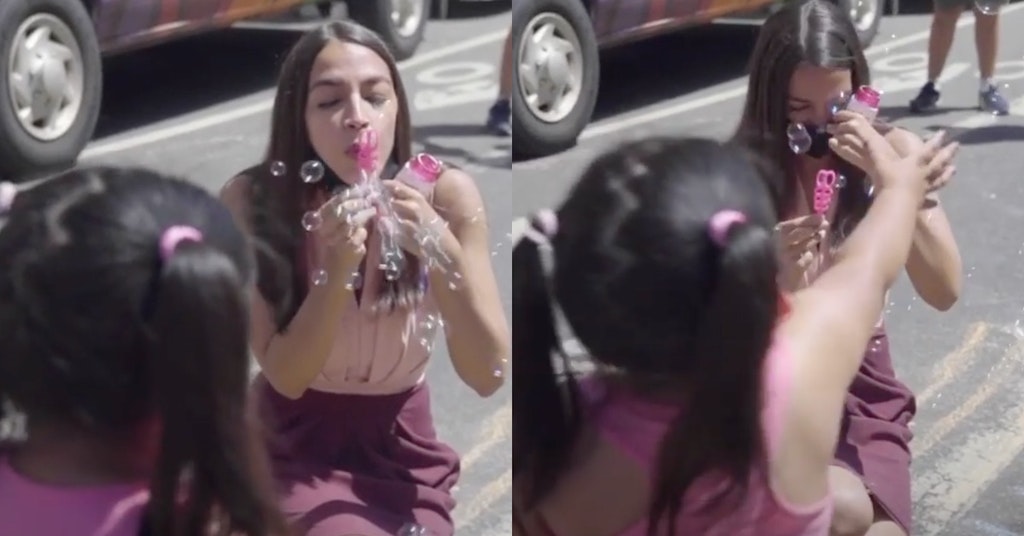 Republicans have an astoundingly deep-seated hatred of Alexandria Ocasio-Cortez, the U.S. Representative for Brooklyn and Queens. When they’re not attacking her for her outspoken political views, or getting a haircut, they’re apparently coming at her for blowing “COVID bubbles” near a child.

The congresswoman shared a two-part video for her reelection campaign back in June, undoubtedly triggering diehard Trumpers with her claim that “early results have us ahead 73% in the polls.”

But they ultimately decided to latch onto something else in the video — a shot of AOC pulling her mask down to blow bubbles towards a nearby masked child.

Yes, we do all need to keep our masks on as much as possible, and taking one off to blow bubbles is not the greatest decision in the world. However, this is clearly a bad faith argument from AOC haters, who have no problems with President Trump’s repeated refusal to wear a mask, and who purposely ignore that Ocasio-Cortez is outdoors, distanced from the child, and is wearing a mask throughout the rest of the video.

Fortunately, doctors spend time on Twitter, too, and Dr. Philip Lee decided to weigh in on the whole thing.

“Very good Mia,” he said in response to one of the tweets blasting AOC, “except that you may wish to consider that SARS-COV is inactivated by soaps and detergents, which if I’m not mistake is the principal ingredient of most bubble mixes.”

Trump acolytes should be used to getting burned by science by now, but it’s still hilarious every single time.

If only far right wingers used all this energy they’ve got to come at Ocasio-Cortez over not wearing a mask for a few seconds to convince everyone who refuses to EVER wear a mask to actually do the right thing, maybe the United States’ COVID-19 infections wouldn’t continue to skyrocket. It’s almost as if people not wearing masks isn’t actually something they care about at all!