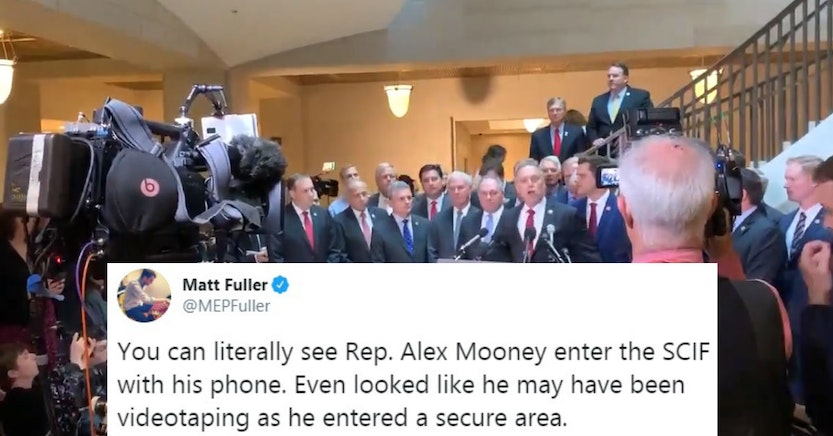 Republican Representative Matt Gaetz led a posse of about 25 other Republicans to “storm” a secure, closed-door hearing of another witness testimony into the possible quid pro quo between Donald Trump and Ukraine. In doing so, because many of them brought their cellphones along into a , they may have compromised the Sensitive Compartmented Information Facility (SCIF), broken the law, and compromised our national security.

Storming the SCIF without respecting the security protocols that require people to leave their electronic devices *outside* the space, is actually compromising our national security.

Hearings that take place in SCIFs are typically sensitive and classified, and security protocols are strict. And yet, whether out of ignorance or arrogance, Gaetz and his cronies barged right in and appeared to live-tweet their shenanigans inside the room where cell phones are barred.

According to cybersecurity expert Mieke Eoyang, these Republicans may have compromised the entire security of the space. Obviously, foreign adversaries have an interest in finding out what’s said inside U.S. SCIFs, and the cell phones of any representative could have already been turned into a “listening device.”

“But in ‘storming the SCIF’ without observing the security protocols, Rep. Gaetz et al, endangered our national security & demonstrated they care more about a political stunt than protecting intelligence information,” Eoyang tweeted. “I cannot emphasize enough how serious this is.”

You can literally see Rep. Alex Mooney enter the SCIF with his phone. Even looked like he may have been videotaping as he entered a secure area. https://t.co/fxURpmIlDP

Among the Republicans who voted to prohibit filming from the public floor of the House in 2017:

All are part of today's riot, which included trying to film from INSIDE A SCIF. https://t.co/jZOFr60jxy

Furthermore, Republicans have supported and led the exact kind of secure, closed-door hearings in SCIFs before, including during the Benghazi investigations. But none of these facts prevented them from carrying out a planned political stunt that House Minority Leader Kevin McCarthy seems to have sanctioned.

NEW — House Minority Leader McCarthy’s office was told in advance that its rebel members would storm the SCIF today. They support it. https://t.co/hthVNifnAG

Although it seems unlikely that none of the Republicans who took part in this stunt knew that taking your cell phone into a SCIF is a massive no-no, Gaetz and Rep. Matt Walker appeared to realize their mistake halfway through, as evidenced by attempts to blame staff for broadcasting the possible crime on Twitter.

When elected dipshits realize they broke the law too late: pic.twitter.com/gfuhqATCaO

Democrats are taking this bungled effort at some kind of protest, which reportedly consisted mostly of random yelling about how mean they’re being to Trump, as a sign of desperation.

“When you don’t have the law or the facts you attack and disrupt the process,” said Rep. Ted Lieu. “And you may wonder why is it happening now? Because Bill Taylor gave a devastating opening statement yesterday. They’re freaked out. They’re trying to stop this investigation.”