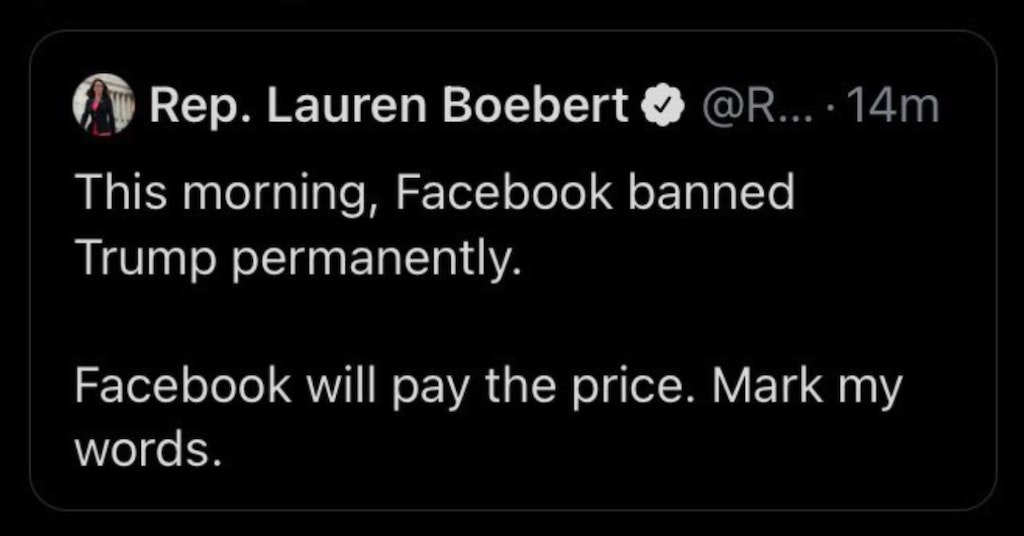 Donald Trump fans are not having a good time after the Oversight Board for Facebook decided to continue to indefinite suspension of the Florida man, which began because he incited an attempted coup at the U.S. Capitol in January.

Although the board found that suspending someone without a deadline went against the company’s own policies, they are allowing it to continue and have given Mark Zuckerberg six months to decide what to do, whether that means lifting the suspension or banning his account permanently.

Unsurprisingly, many Republicans are not happy with this decision.

“Within 6 months of today, Facebook must review this matter and decide a new penalty that reflects its rules, the severity of the violation, and prospect of future harm. Facebook can either impose a time-limited suspension or account deletion,” the board wrote.

They further warned Facebook that if something like this happened again, the company would need to either set a time limit for their suspension or issue a permanent ban and that the “newsworthiness” of a public figure should not be prioritized over public safety.

In other words, nothing has actually changed in terms of Trump’s Facebook suspension. Facebook just needs to decide soon whether they’re going to lift the suspension or ban him. Regardless, Trump-supporting Republicans took this as a signal to be really mad about a thing that Trump doesn’t like.

“Disgraceful,” tweeted Ted Cruz. “For every liberal celebrating Trump’s social media ban, if the Big Tech oligarchs can muzzle the former President, what’s to stop them from silencing you?”

To be clear, Facebook and other “Big Tech oligarchs” can and do suspend and ban everyday, non-president users on a regular basis for offenses much less severe than inciting a violent insurrection against the federal government. If it wasn’t for the fact that Trump was considered special, he likely would have caught a Facebook ban long before January 6, 2021.

These facts did not stop House Minority Leader Kevin McCarthy from claiming that Facebook favors Democrats.

“Facebook is more interested in acting like a Democrat Super PAC than a platform for free speech and open debate,” he wrote. “If they can ban President Trump, all conservative voices could be next. A House Republican majority will rein in big tech power over our speech.”

In reality, studies have found that there is no evidence to support the frequent Republican claim that social media companies disproportionately punish or “censor” them.

Perhaps the worst response, however, came from Rep. Lauren Boebert, who fired off a now-deleted tweet saying that “Facebook will pay the price.”

It’s unclear whether she deleted the tweet because it’s not accurate to say that “Facebook banned Trump permanently” or because she didn’t want to catch her own ban for tweeting something that sounded rather like a threat.