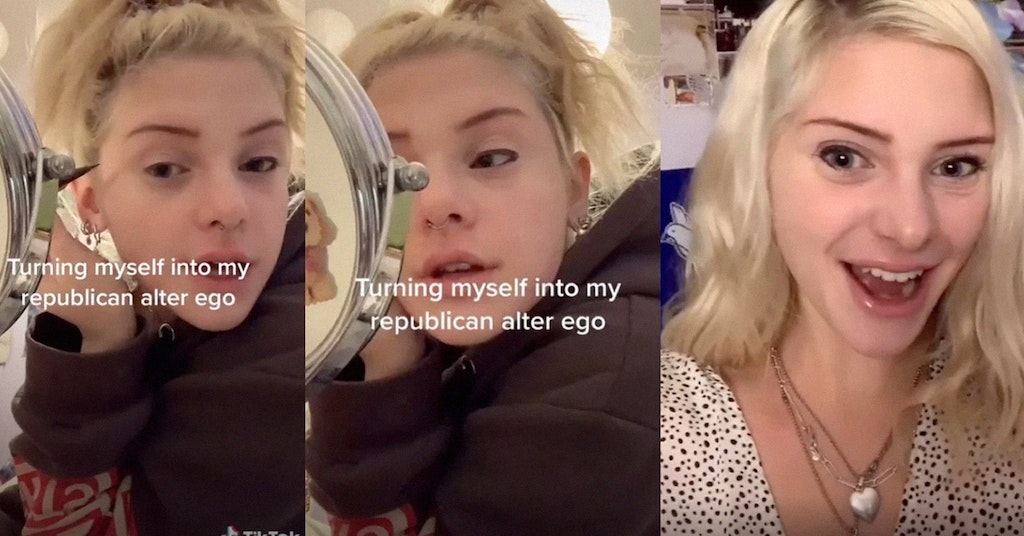 TikTokers Turn Into The Republican Versions Of Themselves In New Challenge


While the way someone looks isn’t always a dead giveaway as to what they believe in, it’s difficult to deny that there is a stereotypical image for a “Republican woman.”

It’s that blend between Fox News host and suburban Karen, with a basic, bland, but put-together style.

TikTokers are poking fun at the familiar look by engaging in a “Republicansona” challenge, where they change up their own image to look like the Republican version of themselves.

All the videos are set to a country song with deeply archaic lyrics. “Somebody’s gotta wear a pretty skirt…so God made girls,” RaeLynn croons in the background as the TikTokers put on full faces of concealer, switch to only neutral colors for their eyes, and drag whatever dress their parents made them wear on Easter Sundays out of the closet.

The results are pretty hilarious and spot-on every time.

The TikTokers even come up with names for their Republican alter-egos.

Shane becomes Shayna (“my dad is a cop”), while one user gets suggestions of both “Ashleigh from Kentucky” and “Mackeliegh Anne-Graceleigh,”

Some of the makeovers are so extreme.

And viewers have clearly been destroyed by the changes.

“This is a hate crime…I will be pressing charges,” wrote one user.

A friend of one of the transformed TikTokers added that “Live laugh love is what I’m gonna haunt you with.”

The tag itself may haunt us all, but it is well worth it.