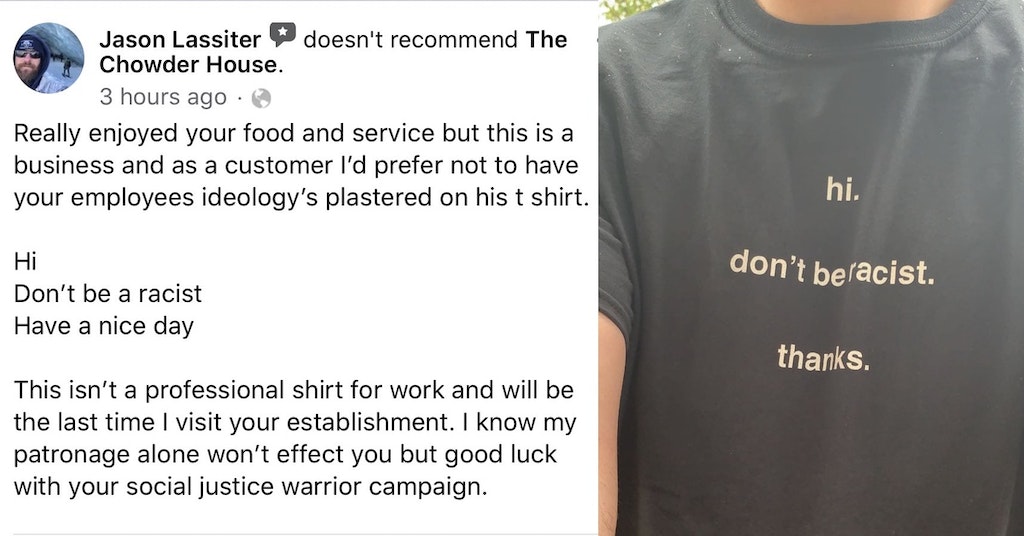 A negative restaurant review left by a customer upset at a server’s anti-racist shirt has the internet in stitches over the absurdity of it all.

Jason Lassiter apparently had a really difficult time suffering through his meal at The Chowder House in Fairbanks, Alaska. In fact, he was so traumatized by a member of the waitstaff wearing a shirt that read “Hi. Don’t be a racist. Have a nice day.” that he left a scathing review and vowed never to return to the establishment.

“Really enjoyed your food and service but this is a business and as a customer I’d prefer not to have your employee’s ideology’s plastered on his t shirt,” he wrote on the restaurant’s Facebook page. He signed off the review wishing the business “good luck with your social justice warrior campaign.”

The review was shared to Twitter by the employee in question, @bryantinak, whose feed is filled with unwavering support for Black Lives Matter.

It quickly gained traction on social media, with folks showing support for him and his phenomenal shirt.

Not to mention absolutely obliterating Jason and his melodramatic response to the idea that people shouldn’t be racist.

—The unmitigated destruction of Jason’s roundabout support for the freedom to be racist led him to eventually delete his review altogether.

But now, The Chowder House is doubling down on their own support for @bryantinak and the fight against racism.

Though he originally said he was no longer allowed to wear his anti-racist shirt, Bryan later clarified that he spoke to his bosses again and that it was a misunderstanding.

“They were bringing the complaint to my attention because they thought it was ludicrous, not because they wanted me to stop wearing the shirt,” he wrote.

Moreover, they actually ordered additional shirts so that ALL their employees could opt in to wearing one.

Because guess what? Being against racism should not be a controversial statement, and if you think it is…you just might be racist!