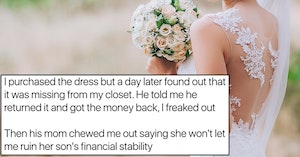 Planning a wedding can be a challenge, especially when expectations for what it will be like clash. For one bride and groom, the major clash was the bride’s wedding dress…and his reaction to her pricey dress was less than stellar.

u/Sealine5033 wrote, “Me (f29) and my STBH (m33) are getting married soon. Wedding planning has so far been going alright except for few things he and I argued about like the venue and flower girl. Now we’ve been arguing about my wedding dress, This might sound clichè but eversince I was young I dreamed of having my own beautiful wedding dress, I can afford it but my STBH thinks it’s not okay to waste a couple of thousands on a dress I’m only going to wear once — yes he might have a point there but for one, this is typical price for wedding dresses. and two, because it’s a once in a life time thing then why not make sure it’s special?”

“STBH still wasn’t convinced, and suggested I rent a dress instead of buying one. He started saying that I’m being irrisponsible with money and brought up how much money I’ve already put aside to ‘rent a face’ (he means makeup) and wear ‘fake’ hair (he means extension) but I have this vision of what I want to…look like, sort of speak, on my wedding and I think that it’s my right as a bride. I went ahead and purchased the dress but a day later I found out that it was missing from my closet. I freaked out but he told me he returned it and got the money back. I was shocked I asked him why he did that and he said he thought the dress was ridiculously expensive and that was wasting money and AGAIN suggested I go rent one.”

She was not happy with him, to say the least. “I blew up and went off on him which I’ve never done before. He literally took few steps back and told me to calm down. I said he had no right, I’m the one paying for the damn dress. He got upset and said that there’s no ‘I’m paying for it myself’ in marriage and that my attitude is setting the tone for what type of dynamic we’ll have in our marriage, he kept on about how I must expect to him to pay for everything while I keep ‘my money’ or spend it irresponsibly (but I never tell him how to spend his money) I responded that he gets zero say in how I spend my money whatsoever.”

“He told me that I should grow the f up and stop with the ‘dream wedding dress’ clichè then stormed off to call his mom who chewed me out saying she won’t let me ruin her son’s financial stability with how I deal with money generally. She too urged me to rent a dress or buy cheaper one, way cheaper than the one I picked and move on but I declined.”

She added, “Yes, he still has the money and said he’ll give it back once we agree to a solution.”

The people of Reddit told u/Sealine5033 that she wasn’t TA in the situation.